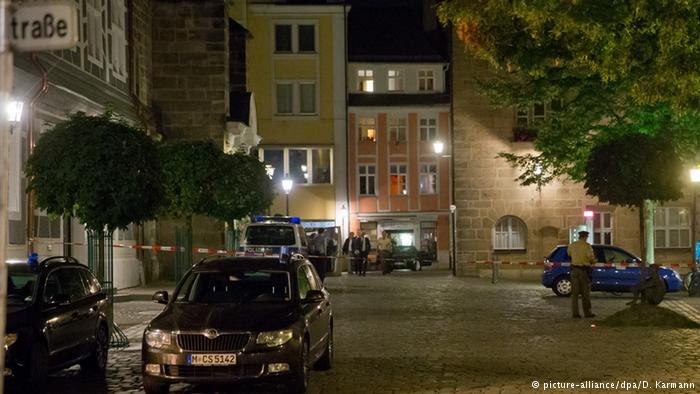 ‘Syrian asylum seeker’ behind Ansbach bomb blast
A Syrian asylum seeker who had previously tried to commit suicide has been cited as the man who was killed in an “intentional” bomb blast in the Bavarian town of Ansbach. Officials are investigating any terrorist links.
Police said in a statement early Monday morning that “a man, according to our current knowledge the perpetrator, died” in the blast outside a wine bar in the town where an open-air music festival was being held on Sunday night. Twelve people were injured, three of them seriously.
The man, who was carrying a backpack, according to Bavarian Interior Minister Joachim Herrmann, had been denied entry to the music festival as he did not have a ticket. The minister said authorities were still investigating if the blast was an act of terrorism. “We can’t rule it out,” Herrmann said.

The center of Ansbach was evacuated after the explosion
A spokesman for the Ansbach prosecutor’s office said the attacker’s motive wasn’t clear. “If there is an Islamist link or not is purely speculation at this point,” said spokesman Michael Schrotberger.
Ansbach Mayor Carda Seidel said the explosion was near an entrance to the festival. Around 2,500 people were attending the event, which was canceled after the blast was heard at about 10 p.m. local time (20:00 UTC).
People were evacuated from the area as the old city was cordoned off and rescue vehicles assembled. There were 200 police on duty and a further 350 members of rescue teams were brought in.
A police spokeswoman said at a press conference that the man is believed to have acted alone.
Asylum seeker
The suspect, identified as a 27-year-old Syrian asylum seeker, arrived in Germany two years ago. His application for asylum was rejected last year but he had been allowed to remain temporarily in Germany and was living in an apartment in the town. He had twice before tried to commit suicide and had received psychiatric care.
Speaking at a press conference, Herrmann said it was “outrageous” that someone would abuse the asylum system and added that everything would be done to prevent this kind of behavior.
The minister told the DPA news agency he agreed that it was too early to say if there was any link with the self-styled “Islamic State” (IS), but added that could not to be ruled out.
Herrmann said, however, that it did appear that the individual intended to harm others.
“Given that he had a backpack with explosives which also had many sharp-edged pieces of metal packed inside – which would be the case with a bomb intended to injure as many people as possible in the surrounding area – we must assume that this was not purely an act of suicide but rather that he wanted to bring disaster to as many people as possible,” said the minister.
State police in Bavaria called on witnesses who had taken videos or images of the scene to send them by email to help with the investigation:
There is a US army base at Ansbach and the 12th Combat Aviation Brigade is based there. A spokesman could offer no information about the explosion.
Blast follows Munich attack
The blast in Ansbach was Germany’s fourth violent incident in a week. It occurred just after Friday night’s gun attack in Munich which left nine people dead.
There were services held throughout Germany on Sunday in memory of the victims.
Also Sunday, a 21-year-old male refugee from Syria known to authorities for previous acts of violence killed one woman and injured two more people in the city of Reutlingen in southwest Germany.
Last Monday, a man armed with an ax attacked travelers on a train near Würzburg. Five people were injured in that attack.