Recruiting children (IS -Dae’sh- as a model) 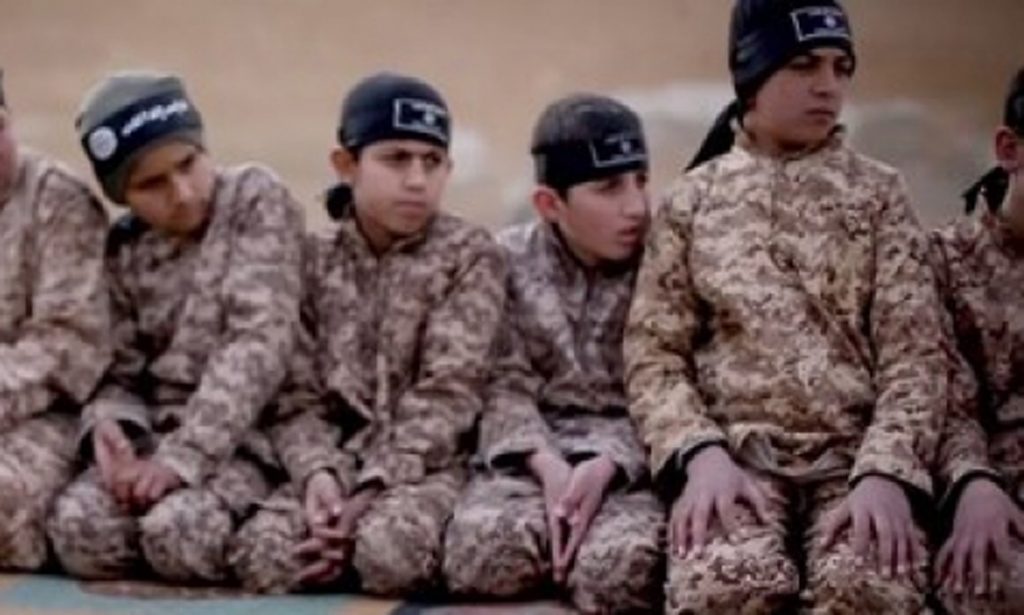 Recruiting children in areas of conflict in the Middle East (IS Terrorists -Dae’sh- as a model)
By
Gen. Staff. Dr. Emad Allow
Adviser  at the European Arabic Center for counterterrorism &  intelligence studies

The United Nations defines a child recruiter for the purposes of fighting in conflicts and wars, as any child associated with military force or military group, which is anyone under the age of eighteen years of age and still or a conscript or used by military or military group in any recipe, including the strengthو  for example, and not limited to children and the young men and girls who are recruited fighters, cooks, porters, spies or for sexual purposes. (Source: Paris Principles on the involvement of children in armed conflict, 2007(.
In the atmosphere of conflict and war and terrorist operations carried out by takfiri extremist groups, particularly the terrorist organization Dae’sh, there are today hundreds of thousands of children have been recruited into armed conflicts in the Middle East and especially about the world in general. The information available through our intelligence and media reports and issued by the Dae’sh media that most child soldiers have been beaten into submission and force them to join the armed groups, while others join to escape poverty or to protect their communities or out of a sense of desire for revenge.
It is worth mentioning that the recruitment and use of children under five years of age to work as soldiers is prohibited under international humanitarian law and in accordance with the treaties and conventions, as it is defined as a war crime by the International Criminal Court. Moreover it proclaims human rights law, the age of eighteen as the minimum legal age for recruitment and use of children in hostilities, and insert the parties to the conflict that recruit and use children by the Secretary-General on the list of shame issued annually. A lot of photos and videos have shown the organization ISIL Terrorists operations recruitment of children and juveniles in the ranks of its elements, and they are trained in the camps of the so-called “cubs Caliphate” where the organization subjecting children to harsh training and education of the use of weapons of various kinds, in addition  hired to work as porters to transport ammunition or injured from the elements ISIL Terrorists. It also ISIL Terrorists using children for purposes of reconnaissance and intelligence-gathering for military units and vital goals, as well as “for airing rumors and false news among the people. The girls suffer vulnerable situation, in particular, are often forced to work into slavery for sexual purposes. In addition, it has proved the use of the organization ISIL Terrorists children to carry out terrorist acts, including suicide bombers, or IEDs.
ISIL Terrorists forcing children to enroll in succession cub’s camps, which are divided into the following

:
1. Camp rightful course and duration of 15 days, during which the child learns how to perform ablutions and prayer and what is taboo and evil, and classes teaching the Koran. It does not know how to read and write them, are subject to double sessions called “decoding illiteracy”, held inside the camp.
2. Military training course and duration (one month and ten days), during which children martial arts education and dealing with weapons and driving and processing kit and gear for fighters, and after completion of the sessions, the children battlefronts breakdown by situation on the ground.
Interview published United Nations report revealed that between 800 and 900 children were kidnapped, by organizing Dae’sh, from the Iraqi city of Mosul, in 2015 alone, to train them religiously and militarily. He said the report, published by the United Nations Assistance Mission for Iraq and the Office of the United Nations High Commissioner for Human Rights, that the kidnapping was carried out in June 2015. It was the children were divided into two groups: the first, for children aged between five and 10 years. And put them in camps to receive religious training. The second group, for children between 10 and 15 years old. Their owners and taken to a military training camps, the camps of pride and Ghazlani south of Mosul. Iraqi Observatory for Human Rights, has stated that the first six months of 2015 saw the implementation of 40 children, the so-called cubs Caliphate, for suicide attacks in Iraq. Published the29th of March  recording a video on the Internet showing the first time children (Cubs succession) carry out the mass execution of the nine prisoners accused the organization of being “rejectionists.” German news agency Monday also reported the 6th of April 2015 that the organization “Dae’sh” devoted four camps in the northern city of Mosul for the training of children and adolescents on the means and methods of slaughter, and physical and psychological torture to target figures who wasted her blood and refused to join the organization in Mosul, as well as prepare the upcoming military confrontation with Iraqi forces to liberate the city. ”
Based on “one of the foregoing, the dilemmas faced by the Iraqi armed forces when doing editing city of Mosul is difficult to distinguish child soldiers by ISIL Terrorists for others, especially” during the storming of the city operations and engagement with the elements of the organization, as well as during the evacuation of the civilian population!
It is worth mentioning that international humanitarian law requires all parties to the conflict to refrain from recruiting minors or using them to participate in military actions, and ensure the protection of civilians and allow them to leave the conflict zone safely, regardless of how the recruitment of child soldiers, and the roles assigned to them, the children of soldiers are the victims in their participation in conflicts and wars lead to serious consequences for the physical and psychological health. And are often subject to cruel, hurt and most of them face death, murder, sexual violence and many of them are forced to commit these massacres to the extent that some of them suffering from serious implications for the psychology in the long- term and then the reintegration of these children to society again represent extremely complex process.