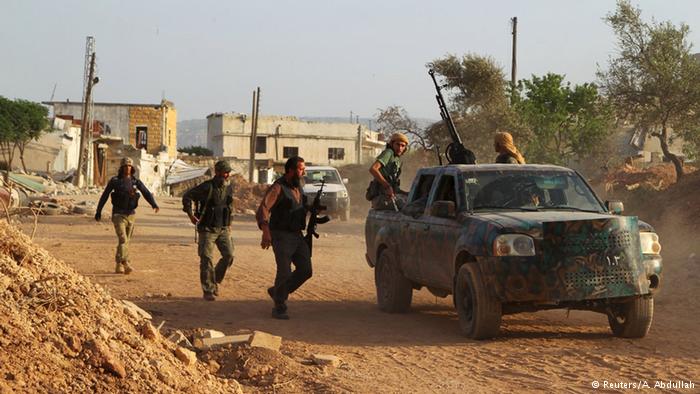 The Pentagon has said a group of Syrian rebels trained by the US military to fight “Islamic State” jihadists has handed equipment to the al Qaeda-linked Al-Nusra Front. It is the

latest setback to the training program.
The US-trained Syrian rebels had given some of the equipment and ammunition supplied as part of the training program to Al-Nusra Front in exchange for safe passage, a US military spokesman said on Friday.
Roughly 25 percent of the equipment assigned to the unit had been surrendered to the al Qaeda-linked group earlier this week, according to US Central Command (CENTCOM), which is in charge of efforts against “Islamic State” (IS) in Iraq and Syria.
“If accurate, the report of NSF (New Syrian Forces) members providing equipment to Al-Nusra Front is very concerning and a violation of Syria train-and-equip program guidelines,” CENTCOM spokesman Col. Patrick Ryder said.
Previous denials
The acknowledgement that Syrian rebels may have handed over military gear runs counter to earlier Pentagon statements denying reports that some US-trained fighters had either defected or given away equipment.
The incident highlights problems facing the US-led coalition’s $500 million (447 million-euro) program to train and equip “moderate” Syrian rebels to fight “IS” as an alternative to using US ground troops, which the Obama administration is unwilling to do.
The program, which began in January, is aiming to train some 5,400 fighters a year for three years, but so far only a fraction of that number has taken part amid problems finding suitable candidates.
Program overhaul
A group of 54 first graduates was attacked by Al-Nusra in July, and the Pentagon is unsure of their fate. The group that turned over the equipment to the al Qaeda affiliate was a second group of about 70 rebel fighters.
A top US general told Congress last week that only four or five of the trainees are still fighting in Syria, though US military officials have since said that they have since been joined by dozens of others.
The United States has put forward suggestions for revising the program in the face of these setbacks , and is considering having the newly trained fighters operate alongside Syrian Kurds, and forces made up of Sunni Arabs and others combating “IS.”
tj/sms (AFP, AP, Reuters)