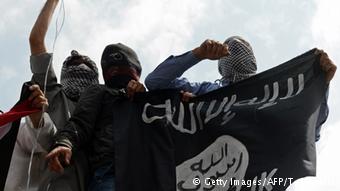 Russian President Vladimir Putin has said that Russia and the US might coordinate airstrikes against the “Islamic State” in Syria. The announcement came after bilateral talks with

US President Barack Obama.
US President Barack Obama and his Russian counterpart Vladimir Putin emerged from a private meeting on the sidelines of the annual United Nations General Assembly summit. The Russian leader described the talks as “very constructive, business-like and frank.”
Putin said that he and Obama had mainly discussed the US-led coalition’s action against the self-declared “Islamic State” (IS) in Syria.
After his first formal meeting with Obama in two years, the Kremlin chief announced that he has not ruled out joining airstrikes against IS in Syria but stressed he would not send ground troops into combat. He also added that any Russian action in Syria would be in accordance with international law.
However, Putin told reporters that Syria’s future should be decided by its people and not by politicians, hinting at Obama’s declared position of abolishing the Assad regime in Syria. Putin maintained, however, that he would “work in order to overcome existing differences” with the US.
Obama and Putin had previously disagreed over how to manage the chaos in Syria, with Obama urging a political transition to replace the Syrian president but Putin warning it would be a mistake to abandon the current government.
After dueling speeches at the United Nations General Assembly , Obama and Putin met privately for 90 minutes – their first face-to-face encounter in nearly a year.
Obama reaches out to Putin
In his address to the UN earlier on Monday, Obama had said he was open to working with Russia to bring Syria’s civil war to an end. He called for a “managed transition” that would result in the ouster of Syria’s Bashar al-Assad , whose forces have clashed with rebels for more than four years, creating a vacuum in which the “Islamic State” and other extremist groups have flourished.
Obama and Putin agreed on the need to defeat the self-styled “Islamic State” in Syria, but did not manage to find much common ground
An aide to the US president said that Obama had repeated his stance in front of Putin during their private meeting. Putin, however, urged the world to stick with Assad, arguing that his military was the only viable option for defeating IS.
Obama and Putin’s disparate views of the grim situation in Syria left little indication of how the two countries might work together to end a conflict that has killed more than 250,000 people and resulted in a flood of refugees.
Russia ups the ante in Syria
Despite Obama’s staunch opposition to Assad remaining in office, the US has struggled to push him from power. Russia has long been a major obstacle, shielding Assad from UN sanctions and continuing to provide the Syrian government with weapons.
In fact, Russia has appeared to deepen its support for Assad in recent weeks, sending additional military equipment and troops with the justification that it is helping the government fight IS.
The military buildup has confounded US officials, who spent the summer hoping that Russia’s patience with Assad was waning and that political negotiations could finally be started.
Ukraine crisis
Beyond the Syria issue, Obama and Putin had also been expected to discuss the crisis in Ukraine during their evening meeting. Obama and Putin have long had a strained relationship, with ties deteriorating to post-Cold War lows after Russia annexed Crimea from Ukraine in early 2014 and allegedly backed rebels in Ukraine’s war-torn east. The US, along with the European Union, has sought to punish Russia through economic sanctions.
Obama, in his address at the UN, said the world could not stand by while Ukraine’s sovereignty was being violated.
“If that happens without consequences in Ukraine, it could happen to any nation gathered here today,” he said.
ss/cmk (AFP, AP, Reuters)