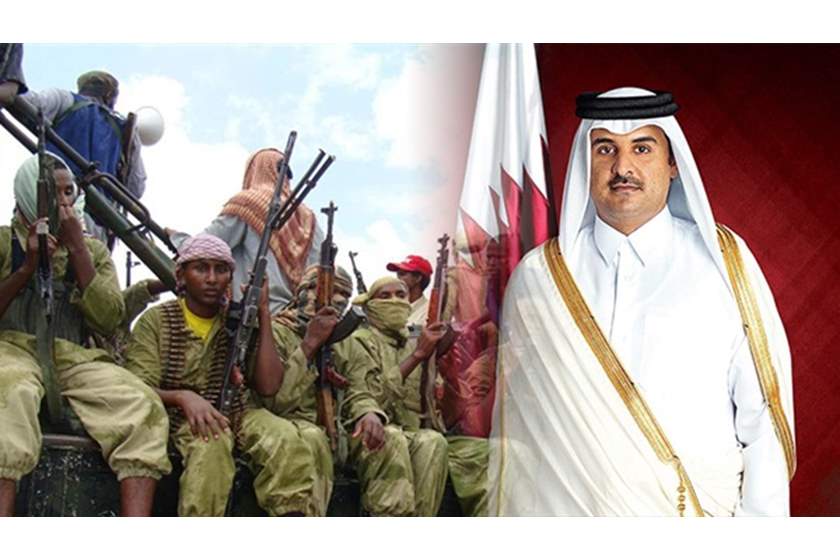 The New York Times leaks, including a phone call between a businessman close to Tamim bin Hamad, the emir of Qatar, called Khalifa Kayed al-Muhanadi and the Qatari ambassador to Somalia, Hassan bin Hamza bin Hashem, revealed the subversive role played by Doha in Somalia and its ties to the terrorists there. According to the US newspaper, Khalifa al-Muhanadi said that militants carried out Bosaso bombing to advance Qatar’s interests … our friends were behind the bombing … these attacks will force them to run away. His remarks confirm Qatar’s efforts to remove its rivals from that region. He meant the UAE and DP World that manages the port of Bosaso. The aim of these attacks is to “kick out the Emirati (investments), so they don’t renew the contracts with them” and Qatari investments will replace them.

These remarks were not denied by Qatar in the official statement it released after the uproar caused by the disclosure, even though it tried to repudiate the official capacity of al-Muhanadi, claiming that he was not speaking on behalf of the State, and ignoring that the other party was the Qatari ambassador who expressed no protest at al-Muhanadi’s talk. Al-Muhanadi is not just a businessman; he is close to Tamim bin Hamad, the emir of Qatar. Some suggest that al-Muhanadi is a Qatari intelligence agent hiding under the cover of a businessman to facilitate funding terrorists who execute the Qatari agenda of destroying states. Libyan sources accuse him of transferring large amounts from his bank account in Tunisia to Libyan militias. Also, al-Muhanadi didn’t deny the phone call. He told the New York Times that he and the Qatari ambassador were talking as citizens and not as government officials.

What is strange is the Somali government stance, which released a statement suggesting that Qatar is not supporting terrorism in Somalia, instead of using the recording as evidence against Qatar in all international forums. This also reflects the clear relation that links Abdullah Farmajo’s government to the Qatari regime through Fahad Yasin, the chief of staff of Somalia Presidential Palace, who is known to be close to the Qatari regime.

David Kirkpatrick, a New York Times journalist who co-wrote the story, told the BBC that al-Muhanadi is close to the Qatari regime, particularly to Prince Tamim bin Hamad. He added that al-Muhanadi said “our friends were behind the bombing (that targeted a court in Bosaso in May)” to drive away the Emiratis.

Bosaso is a coastal city in northern Somalia, particularly in the autonomous Puntland that overlooks the Gulf of Aden. Regarding the deal in the leaked recording, it is related to Bosaso port. Dubai-owned P&O made a deal with Puntland state in April 2017, under which the company got a 30-year concession to invest in the port, with $336 million. So, Qatar is trying to pressure Emirati companies to leave Somalia’s ports in order to replace them.

Bosaso’s bombing occurred northeast of Somalia, outside a court in Bosaso on May 11. It targeted the car of an official at the moment of entering the courthouse, resulting in destroying the car and wounding a number of citizens. The president of the court, Abu Bakr Abdel Noor, survived the bombing because he was not in the car when the bombing occurred.

This bombing was not the first terrorist act in Bosaso. In February 2019, Paul Anthony Formosa, operation manager at Dubai-owned P&O, was shot and killed. Al Shabab militant group claimed responsibility for the attack, saying that Formosa was illegally in Somalia. Therefore, in the light of the recent leaks, investigation must be re-opened in that operation too to see whether Qatar stands behind it or not.

The Position in International Law

Ayman Salama, Professor of international law, pointed out in a phone call on Sky News Arabia that the ambassador is the official envoy of the State, therefore, whether his conversations were official or not, he is responsible for what he said, especially that the Qatari ambassador didn’t deny or dispute the validity of the recording. He clarified that if any UN-member State submitted official notifications to the UN Counter-Terrorism Committee, there may be an urgent meeting for the UN Security Council to impose sanctions on Qatar, because the main concern for the international community now is to eliminate terrorism and the States that fund it.

He added that individual or group States can impose sanctions on Qatar for funding terrorism, even without resorting to the Security Council. He thinks that the global public opinion must push for initiating proceedings against Qatar for sponsoring, supporting and financing terrorism.

One might ask: why is Qatar present in Somalia? Facts suggest that it is not Qatar alone who seeks to control Somalia; many other powers sought and still seek to dominate that country which collapsed in the early-1990s, because it is one of the important States in the Horn of Africa. It is characterized by its strategic location in this region which has a direct effect on the global trade movement because it overlooks many international waterways, such as the Indian Ocean, Bab al-Mandab Strait, the Red Sea and the Gulf of Aden. It is also an extension to the Arabian Gulf’s security due to its proximity to the Gulf States, and it is a member of the Arab League and a Muslim-majority country.

International and regional powers have scrambled for this country, taking advantage of the chaos that followed the fall of President Siad Barre’s regime in 1991, and the fall of State institutions that followed, where Somalia became an example of the failed state, and entered in a civil war ever since.

This atmosphere paved the way for radical movements, most notably al-Shabab al-Mujahideen, the most dangerous terrorist group in Somalia and the neighboring countries. The movement, since its creation in 2007, was able to control over 85% of Somalia. It launched fatal attacks that killed and injured hundreds inside and outside Somalia. The US designated the group in February 2008 as a foreign terrorist organization, and described it as a radical violent group that is affiliated to al-Qaeda.

Foreign interventions in Somalia started shortly after the fall of Siad Barre’s regime, through the US-led ground operation “Operation Restore Hope” in 1992, in an attempt to control this country. But it drastically failed and the soldiers were defeated in Somalia. However, the US attempts didn’t stop and it employed Ethiopia to achieve that goal.

Qatari Meddling in Somalia is Not New

Recently, suspicious roles for Qatar appeared in that failed State, in an attempt to gain a foothold in the Horn of Africa region. This is proved by what have been circulated regarding accusing Qatar of funding al-Shabab group, through the top Qatari terrorist financer, Abdul-Rahman al-Nuaimi, who is accused of sending $250,000 to al-Shabab in 2012, according to the US Treasury report.

Furthermore, leaked documents that appeared on WikiLeaks noted that the former US ambassador to the UN, Susan Rice, had asked Turkey in 2009 to pressure Qatar to stop funding al-Shabab. According to the document, Rice said that the funding was conducted by transferring money to Somalia through Eretria. The same accusation was echoed by Sharif Sheikh Ahmed, the then-president of the Transitional Government, who said in a meeting with US diplomats in Libya that Qatar’s government provides financial support to al-Shabab group.

Qatar’s subversive roles didn’t stop at supporting and financing al-Shabab, but they moved further to the attempt of creating more terrorist movements in Somalia. The Somali SunaTimes revealed in January 2018 that a secret meeting was held in Turkey with the participation of Qatari and Iranian intelligence officers, representatives of Hezbollah, and Fahad Yasin, the chief of staff of Somalia Presidential Palace, who is known to be close to the Qatari regime and the Muslim Brotherhood’s god father, Yusuf al-Qaradawi, to create a terrorist group in Somalia.

The Somali newspaper said that foreign intelligence agencies detected that meeting and informed foreign diplomats of the details of the meeting, during which Fahad Yasin was tasked with “political destabilization” of local governments in some Somali provinces that oppose the Qatari regime.

The newspaper added that the Qatari regime created a “war room” in its embassy in Mogadishu, to “coordinate the operations” of the new terrorist force, and that Qatari and Iranian intelligence officers lead a team to support this militant force, including al-Shabab top leader Zakaria Ismael, who is known to have served as the intelligence officer of the group.

The tasks included efforts to drive a wedge between the Somali president Mohamed Abdullah Farmajo and States that oppose Qatari subversive policies such as Saudi Arabia, the UAE, and Egypt.

It confirmed that the Qatari regime, along with Iran and the Somali terrorist Brotherhood named “Al Islaah,” are waging a proxy war in Somalia, and that those parties are seeking to “establish militant Islamist Salafist groups, strong enough to maintain their control over the whole country, whether by cooperating with the central government and the provincial governments” there or without cooperating with them. SunaTimes also mentioned the subversive role played by the Qatari regime, explaining that Qatar, Iran and the Brotherhood prefer to undermine the Somali State.

It revealed that the ruling regime in Qatar offers its sponsorship to the Somali “Al Islaah” movement, to exploit this Brotherhood movement in spreading Doha’s influence and enforcing its geopolitical presence in Somalia. The newspaper touched upon the suspicious activity of Fahad Yasin, who is also known for his close ties to the Somali Brotherhood leaders, confirming that reports say that Qatari officials are working with the leader of “Al Islaah” to form a new military wing that recruits (from the members of the terrorist) Al-Shabab movement and is funded by Qatar.

After the New York Times leaks, Qatar won’t be able to accuse the neighboring countries of standing behind defaming its image or pinning unfounded charges of supporting terrorism. The evidence this time came in the words of its followers and diplomats, and was published by a foreign newspaper. The international community should take a decisive stand against these Qatari meddling and support for terrorism, which are not limited to Somalia but extend to several countries, most notably Libya. It should also investigate to uncover the Qatari roles in supporting terrorism and its militias.