Alternative for Germany AfD: between security pressures and Nazi slogans 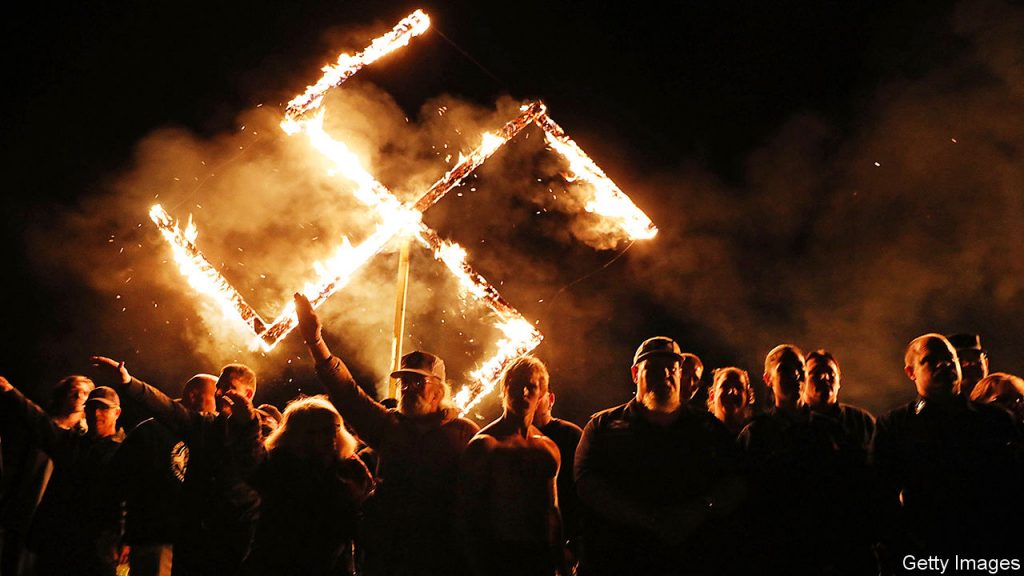 Alternative for Germany party was founded in Berlin on February 6, 2013. It is chaired by Jörg Meuthen and the vice chairman Alexander Gauland. The popularity of the party increased during the refugee crisis 2015-2016, when the German chancellor Angela Merkel opened the country’s door to 1 million asylum seekers. But its popularity declined in recent months, according to surveys, with the cessation of immigrants flow and the outbreak of internal disputes inside the party.

Alternative for Germany (AfD) started as an anti-Euro movement and was about to end before it deflected. But it witnessed a great rebound. The party developed into an anti-refugee party, and considers itself to be a natural partner to PEGIDA movement in Saxony, east of Germany. The party enjoys its largest popularity in the eastern part of Germany, although the number of immigrants in that part is less than the rest of Germany. The AfD is pursuing a new strategy to promote its goals, which is based on “superior culture” and using historical images, including the “slave market” image which reveals to where the multicultural society could lead.

Observers describe this approach as a sort of “cultural racism” rooted in the Western civilization, which addresses a lot of AfD supporters who reject Islam. The AfD also called for withdrawing from the Charter of the United Nations. The party is also known for:

Björn Höcke: he is the party’s founding member in Thuringia and one of its ideological leaders. He regularly appears as an official spokesperson in the events and rallies organized by the party. The far-right thinker has long promoted his own unique version of revolutionary thought. He often refers in his speeches to ideas attributed to people like Antonio Gramsci and Vladimir Lenin, and some quotes of other revolutionary vanguards. The seriousness of Höcke is apparent in his latest book, Nie zweimal in denselben Fluss (we can’t swim in the same river twice). In the book, Höcke identifies his vision of another Germany. This book is a terrifying indicator that reveals how Höcke’s ideas can only be achieved through a right-wing revolution.

The party held a conference on January 11, 2019 through which it discussed the issue of leaving the EU, only days before a decisive vote for the British Parliament on Brexit. The party demanded deep reforms by 2024, that is by the end of the next European parliamentary term, warning that in case that this demand is not met “it would be necessary that Germany withdraws, or form a coordinated solution for the EU,” according to Monte Carlo radio on January 11, 2019. The AfD’s platform, consisting of 58 pages, accused the EU of being “a non-democratic structure made by bureaucratic people who don’t have much transparency and are not subject to supervision,” according to Al Jazeera on January 24, 2019.

This scenario was dubbed Dexit, which stands for Deutschland exit. Alexander Graf Lambsdorff, a leader of the Free Democratic Party of Germany, said that the AfD “wants to plunge our country and continent in chaos.” But, according to Asharq Al Awsat on January 14, 2019, Klaus-Peter Sick, historian and political thinker, sees that “the AfD is seeking to re-qualify a German nationalist stand” through this discussion.

Reasons for the party’s declining popularity

Belgian intelligence reports revealed on March 22, 2019 that “the far-right in Europe has started to change the pattern of its activities; the leaders of some extremist groups ordered its members to train on shooting and the possession of weapons legally or illegally; and that the far-right supporters are not hiding their admiration of Nazism.” On April 28, 2019, Die Welt quoted the document it exclusively had access to that “the danger of the far-right organization is significantly increasing in the country, with changes in the structures and methods of these organizations.”

In this context, accusations point to the Alternative for Germany right populist party for assassinating the local politician Walter Lübcke in early June 2019, for political reasons. The party is accused of contributing in the creation of a conflict environment, through its populist rhetoric and posts on social media, in addition to creating an atmosphere (to commit crimes) through defaming democratic activists. But the AfD’s spokesman for interior policy, Gottfried Curio, defended his party against all these accusations.

Analysts point that from 94 AfD MPs, 30 have close relations with security, judiciary or military sectors. Observers also explained that the party has become a haven for some suspicious police officers in the state of Mecklenburg-Vorpommern, northeast of Germany.

German authorities discovered illegal transfers for the party from abroad before the general elections, even though the party has been long promoting itself as “enjoying transparency.” The public prosecution stated that “the delivery of illegal and suspicious donations from a pharmaceutical company in Switzerland to the accounts of the region where Alice Weidel, the Leader of the AfD in the Bundestag, was a candidate is a violation of the law on parties.” The party didn’t declare these “donations” that reached 130,000 Euros. Also, the party leader in Thuringia, Björn Höcke, raised money for the party’s activities through foreign associations, which can be considered “illicit political financial contributions.”

The rise of the AfD was linked to the neo-Nazis in the streets of Chemnitz, during the protests of August 2018, which involved chasing foreigners and hassles with policemen, not to mention the extremist attitudes and the opposition of fraternity and diversity within the German society. On October 10, 2018, German historians accused the party’s leader, Alexander Gauland, of using Adolf Hitler’s phrases, after rephrasing them, in an article that criticized the “globalized class” which he said “threatens all what is good in the country.” The co-chairman of the party rejected the accusations. This development comes amid a series of controversial issues related to his party’s views on the Nazi era, according to France 24.

Thomas Oppermann, Vice President of the Bundestag and former chairman of the SPD Parliamentary Group, called for “investigating the relation between neo-Nazis and the populist AfD after a wave of racist violent acts as a result of the death of a German citizen stabbed by refugees in Chemnitz, according to DW. He said, “The refugees issue is causing a division in the society. And the AfD is using this trend with increasing extremism.” This came in a statement for Welt on September 3, 2018.

For her part, Rose Gerdts-Schiffler, the intelligence spokeswoman for Bremen, said that security officials began monitoring the youth wing of the AfD. And Lower Saxony started to monitor the same wing after the state’s Minister of Internal Affairs, Boris Pistorius, spoke about “clear signs of structural links with extremists from the right wing,” on September 3, 2018, according to Euronews.

This organization was discovered in 2011 after killing 10 people at least, 8 of them were Turkish people, in cold blood during the period from 2000 to 2007; conducting 2 bomb attacks; and robbing 15 banks. The NSU is hoping to inspire other extremists to conduct similar attacks. Other four people were convicted with committing crimes with the help of the terrorist group. Ralf Wohlleben was sentenced to 10 years in prison for supplying the group with weapons. The Telegraph mentioned in an article on July 11, 2018, titled “Alleged sole survivor of German neo-Nazi terror cell facing trial verdict,” that the judge found that the killings had “Nazi racist motives” and were designed to spread “fear and insecurity” among immigrant communities.

But critics said that the trial left unanswered questions about how far was the German intelligence in contact with the National Security Service, after it had been revealed in the trial that many intelligence informants were in contact with the group. Victor Perli, a member of the German Left Party (Die Linke), said, “as long as the extent of the authorities’ knowledge and the involvement of intelligence services are not revealed, the State has failed.” The Supreme Council of Muslims in Germany said that not shedding light on the role of internal intelligence services is considered “a great failure and burden on the victims’ families and societal peace in Germany.” The Council also demanded the introduction of a commissioner for racism, who submits an annual report to the German parliament.

Observers view the Alternative for Germany since its creation as a far-right party and an extension of the Nazi NPD, which includes neo-Nazis and other extremists. It is a party that seeks to prove that the rule of law and order are prone to erosion due to the rise of violence crimes among Muslim immigrants and political asylum seekers. German intelligence reports revealed the involvement of the party in “fabricating” fake news about foreigners and immigrants, to gain new supporters. The AfD didn’t hesitate to invest in events that involved immigrants or refugees to mobilize rallies in German cities.

What increases the dangers of the far-right, including the AfD, is the sympathy of some members of the German police, intelligence and defense with their targets. Meanwhile, the former interior intelligence chief, Hans-Georg Maaßen, was not above suspicions; he was relieved from his duties due to the same problem. Although the issue of the Supreme Court monitoring the far-right currents is a sensitive issue in Germany, there are political and popular voices that calls for monitoring the party’s movements, particularly with the change in the far-right policies and the tendency to conduct terror acts, including assassinations. Given the party’s declining rate of popular support, the AfD must distance itself from extremism and Nazi rhetoric that threaten the national security, and seek to implement what the German law on parties and the Constitution endorse.

*Copyright reserved to the European Center for Counterterrorism and Intelligence Studies