Extremism and Polarization in the Netherlands 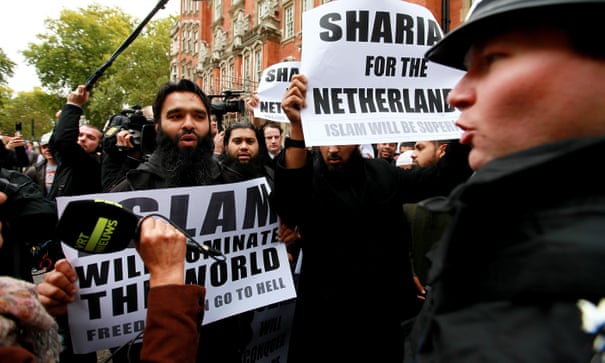 Even before 9/11, a public debate about the failure of integration in the Netherlands was underway.

In early 2000, for example, the left-leaning writer Paul Scheffer wrote an important essay in the Dutch newspaper NRC Handelsblad titled “The Multicultural Drama”. He stated that immigrant communities do not integrate in Dutch society. One of the main problems, he maintained, was that the native Dutch were not accepting most of the immigrants as one of them. Scheffer also observed that different groups were not living together but simply next to each other. The essay was difficult to swallow for the left wing in politics and nothing really changed.

After 9/11, however, the gloves came off and new populist politicians came to the fore, openly attacking Islam and painting the Muslim communities as a problem.

The most prominent of the new politicians was Pim Fortuyn. Fortuyn openly said in 2002 that Islam is a threat to the Dutch democracy. In May 2002, one and a half weeks before the elections, Fortuyn was shot dead. This was a massive shock – it was the first political murder in the country since the 17th century. The murderer was a left wing radical who thought he had to kill Fortuynto stop him from exploiting Muslims as “scapegoats” and targeting “the weak members of society” in pursuit of political power.

In November 2004, Mohammed Bouyeri stabbed Theo van Gogh to death in the street in Amsterdam. Van Gogh was a provocative columnist and filmmaker. This killing too deeply shocked the country, especially when it emerged that Bouyeri was a member of the Hofstadgroup, a group of extremist Muslims who had radicalized within the Netherlands.

After the murders of Fortuyn and van Gogh, politics became polarized and so did society as a whole. Among the Dutch, there was anger at the left-leaning social democrat elite who did not want to accept that integration had failed. On the right, the divisive politician Geert Wilders started his own populist political party, the Party for Freedom (PVV), with a strong anti-immigrant and anti-Islam political program. The PVV is currently the second largest party in Parliament.

Salafists and the Muslim Brotherhood

In January 2005, the government established the office of the national coordinator for counter-terrorism (NCTV). The NCTV’s tasks included stopping the radicalization of young Muslims; preventing the expansion of political Salafism in the Netherlands from the four political Salafist centers in place at the time; and toning down the anti-Western and anti-integration rhetoric within these four centers.

The government has been able to tone down the messages preached in the Salafist centers, but Salafism is currently flourishing in the Netherlands. The number of mosques that adhere to this current of Islam is steadily growing and they are attracting many young people, including Dutch converts.

For its part, the Dutch government does not see the Muslim Brotherhood as a priority, so they can continue to increase their influence.

For some other observers, both the Salafi current in the Netherlands and the Muslim Brotherhood are seen as threats to the democratic order of the country, as these two forms of Islam are deemed to oppose integration and lower the threshold for individuals to radicalize.

In a response to the more visible displays of Islamic dress in public in cities including Amsterdam, The Hague and Rotterdam, populist politicians such as Geert Wilders have started a campaign to “stop the Islamization of the Netherlands”.

This anti-Islam sentiment has also been picked up by the extreme right wing in the country. New extreme right organizations such as Pegida and Erkenbrand make “fighting Islam” a core issue, but seem not to use violence to reach their goals.

With this agenda, they have gained some influence and enjoyed rising popularity. This prompted the extreme left wing to take it upon themselves to actively oppose these right wing groups. Groups of anarchists from Amsterdam and Nijmegen in particular are at the forefront of confronting extreme right wing demonstrations.

Both the extreme right and the extreme left are cooperating with international networks of like-minded organizations in Europe. Right wing Pegida works together with the German right wing organization Hooligans gegen Salafismus (HOGESA) and the Dutch anarchists cooperate within the international Antifa structures. Some of the Dutch anarchists played a major role during the violent riots against the G-20 summit in Hamburg in 2017.

Although the threat level within the Netherlands is currently at Substantial (4 out of 5), the direct threat from right wing and left wing groups is seen as low. The main threat comes from international jihadi networks linked to Islamic State and al-Qaeda.

The latest Dutch government threat assessment, presented in September 2018, provides some figures. At that point, more than 300 Dutch individuals had joined jihadi factions in Syria and Iraq. Around 80 of them had been killed in the regional conflicts. Approximately 140 were still in the Middle East, including women and children above nine years old, who are considered foreign fighters. Around 55 people have returned to the Netherlands and all of them have been assessed as potential threats to society.

In November 2018, the Dutch intelligence service AIVD presented the latest figures in a new report. It put the number of people who had gone to Syria and Iraq at 310. No fewer than 85 had been killed. A further 55 had returned, 35 were in custody in the Middle East, and 135 were still fighting. Islamic State was the most popular choice – 75% of those who went to the Middle East joined it. The remaining 25% joined al-Qaeda or affiliated groups.

In the September threat assessment, the Dutch government says it sees the ongoing growth and influence of Salafism within Dutch Muslim communities as the most serious threat. Salafist organizations are well-funded and becoming more professional. They are able to assert more influence and take over mosques that are in financial trouble.

The influence of Salafism is also growing thanks to a large number of traveling preachers, many of them born or raised in the Netherlands. Armed with a deep understanding of Dutch society, culture and language, these preachers are able to connect with Dutch Muslims, entrenching the Salafist worldview in hearts and minds, especially among the young.

Just as it is in many Western countries, political polarization in the Netherlands is rising. Many see the failure of the government and the bureaucracy to integrate immigrants into society successfully as a key factor. The big contingent of Dutch Muslims joining jihadi factions in Syria and Iraq since 2012 has created a new reality in the country and has shown that the previously lauded “Dutch approach” to deradicalizing extremist Muslims did not always work.

Since 2013, much has changed in the Netherlands. Laws have been revised and more effective measures can be taken against those involved in the radicalization process and those who facilitate jihad. Furthermore, returnees from jihadi theaters can be more easily jailed or even lose their Dutch nationality.

But the government has yet to tackle the growing influence of the Salafist current hard and head on. Now there are discussions in parliament about a new law that would forbid foreign financing of religious institutions, making it easier to stop the flow of money from Kuwait, Qatar and Turkey to mosques and Islamic organizations in the Netherlands.

All this work and debating is urgent – the threat of terrorist attacks in the Netherlands has never been as high as it is now.