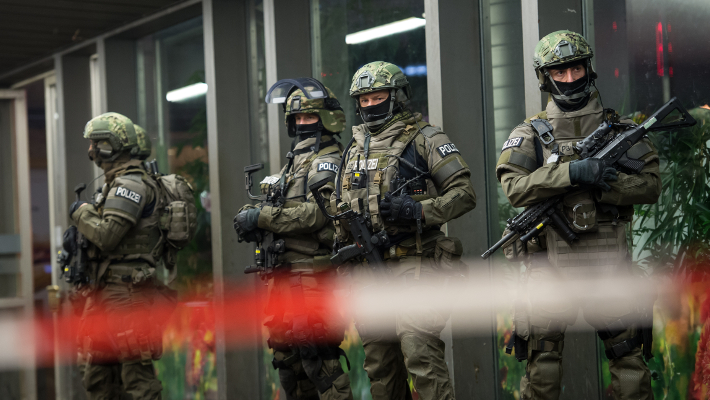 On September 10, 2019, The German Interior Minister Horst Seehofer warned of the rising danger of right-wing extremism, stressing that the danger of right-wing extremism is as serious as Islamic extremism. “We have to classify the threat of right-wing extremism as very high,” says Seehofer. According to the German news agency, the number of Islamists in Germany the security authorities do not rule them out of committing serious crimes in February 2019 reached about (446) Islamists, including (330) Islamists were not imprisoned until that period. Federal Criminal Police Office classified about (760) people as dangerous Islamists, and more than half of them were in Germany at that time.

The 2019 budget for protecting youth against the extremism of ISIS programs was 200 million euros. The Federal Criminal Police Office has more than 900 projects to protect against the threat of extremism. Most of these projects are well active against the Nazis, Islamism, extremism and incitement of interfaith hatred. However, there are shortcomings in only 50 projects related to combating leftist extremism.
The German government has employed several counter-extremism and terrorism programs. (According to Al-Sharq Al-Awsat, on September 18, 2019).

– Combat economic and political espionage Program:  to counter “hackers” attacks on the Internet.

– “Phoenix” Program: to expand and develop the censorship with eavesdropping and video cameras to censor electronic communications. Phoenix’s censorship project is scheduled to be completed in 2026 as part of the war on terrorism and extremism.

The budget plan of the Federal Office for Protection of Constitution focused on scrutinizing asylum processes in Germany and detecting terrorists infiltrating among refugees. As for economic plans, the office called for strengthening the budget to combat the attempts of political and economic espionage by the spies of Russia, Turkey, Iran and Syria. These operations could be carried out by Syrian spies in Germany under the name “ISIS”.

Laws and procedures adopted by Germany in 2019 to counter-extremism

The German Bundestag has approved a new draft law to amend the rules on German citizenship. (According to Russia Today on June 26, 2019). According to the new law, members of any terrorist group or those who fought for any terrorist group outside Germany will be deprived of German citizenship, if they have dual-nationals. The files of foreign nationals who have submitted false documents to the German authorities will be re-evaluated.

According to Sputnik on March 7, 2019, Hans Joachim Grote, The Schleswig-Holstein Ministry of the Interior, says that the cities should therefore be motivated to secure their places “with a city wall or a city wall, perhaps also with the type of building around the square,” The cities should also contain terror risks with the help of skilful urban planning. He wanted to suggest that funding be provided for urban development or village renewal for site redevelopment.

The German Interior Ministry announced that 52 dangerous men and other foreigners affiliated with the radical Islamist movement were deported in 2018. Decisions to deport the dangerous men are taken by Joint Counter–Terrorism Centre. The center is a joint coordinating body for federal and state security authorities. (According to the Al-Arabs on March 7, 2019). The center focused only on combating Islamist terrorism. In 2017, the center deported 57 radical Islamist extremists from Germany.

The German government concluded bilateral agreements with European countries such as Greece and Spain to expedite the return of refugees. Seven asylum seekers who had asked for asylum in Greece were returned directly to Greece by virtue of a bilateral agreement between the two parties (According to DW on January 6, 2019). 26,500 refugees were deported from Germany for not receiving asylum or because they applied for asylum in other EU countries in 2018. The deportation rate increased slightly compared to previous years (23,966 in 2017 and 25,375 in 2016).

Developing and expanding the powers of the intelligence services

The military establishment plans to carry out structural and administrative reforms in order to expose extremist elements early and prevent them from penetrating the ranks of the armed forces of all kinds,) According to the “DW” on September 6, 2019). It is also planned to provide hundreds of jobs in military intelligence as part of the structural reform of the agency. The Defense Ministry is responding to criticism that it has not effectively addressed right-wing extremism within the armed forces.

Officials in both parties of the ruling coalition in Germany supported the demands of the head of the German internal intelligence to expand the mandate of his agency to allow it to monitor text messages via social media to track down extremists. The head of the Constitutional Protection Commission, sees that it is necessary to expand the surveillance system on the grounds that extremists communicate with each other via text messages in social media such as WhatsApp, Facebook and others, (According to Asharq Al-Awsat on April 17, 2019).

The 2019 security budget confirms what Der Spiegel has previously revealed that the bulk of the budget was allocated to expand the number of German security and intelligence personnel. The Department of Constitutional Protection planned to increase the number of its employees by more than 6,000 employees until 2021.

The German government has discussed tightening border controls with Switzerland by setting border controls and increasing people searches, Interior Minister Seehofer said. This comes days after the Frankfurt crime, which was committed by a sein Switzerland (According to Anadolu Agency, on August 2, 2019). German police announced high state of alarm and control on the border with the Netherlands after the shooting in the city of Utrecht in the central Netherlands.

“We are exchanging information with our colleagues in the Netherlands, as well as with the police of the Federal State of North Rhine-Westphalia… we have strengthened control in the areas of Cleve and Aachen” German federal police spokeswoman said. (According to Russia Today on March 18, 2019)

Counter-terrorism and extremism on the Internet

North Rhine Westphalia has launched a satirical YouTube channel to educate young people about the threat of Salafi extremism. The project is sponsored by the Constitutional Protection Commission in the country’s most populous state (According to DW, August 27, 2019). It consists of two sections: a satirical section titled “Jihadi Foul” and another section focuses on the dissemination of serious materials for education and awareness. It is scheduled to produce 32 satirical videos in the first year. In addition to (16) realistic videos with real data. The project cost is estimated at (€500.000).

A website with about 3,000 registered members, 360 of whom had actively participated in 2018, was frozen. It provided details on how to produce explosives. The Police in the central German city of Goettingen coordinated the raids, which searched buildings belonging to the website and seized 127 kg of chemicals used to make explosives as well as fuses and detonators. (According to Reuters on August 20, 2019).

German authorities fined Facebook 2 million euros (2.3 million dollars) under a law aiming at combating extremist and hate speech. the Federal Justice Office said that the social media giant has failed to meet transparency requirements in its handling of hate speech complaints. (According to Sky News Arabia on July 2, 2019).

German Ministry of Family and Youth organized a conference to discuss ways to prevent fundamentalist, leftist and right-wing extremism. The conference was held in Dresden, where more than 3,000 experts participated in it. (According to Al-Sharq Al-Awsat on June 13, 2019). It also brought together educators, jurists, police experts and psychologists from around the world to discuss ways to stop the spread of political extremism among young people.

Germany is facing increasing concern due to the growing number of Islamic extremists classified as dangerous, as well as the wave of right-wing radicalization that sweeping German society. With the proactive measures of the German government such as tightening surveillance on extremists actually and virtually, as well as reducing extremists visits to extremist mosques. In addition to monitoring returning Germans from conflict areas. So that extremist Islamist organizations have ceased their “street” activity, the so-called “street da’wa”.

Although the German government does not fail to allocate funds to implement counter-radicalization programs, it lacks a unified plan to address the risk of further radicalization of young people. As the Islamic extremism rises, German schools’ extremism increases. The risk of right-wing extremists is increasingly expected to affect parts of German society.

Recommendations
Germany needs to continue to strengthen the capabilities of the intelligence services by allocating a broader budget as well as increasing the number of intelligence personnel, in order to be able to cope with the growth of extremist groups in Germany.