The Crisis in Libya and Security Threats: How Extremist Groups are Taking Advantage of the Chaos ? 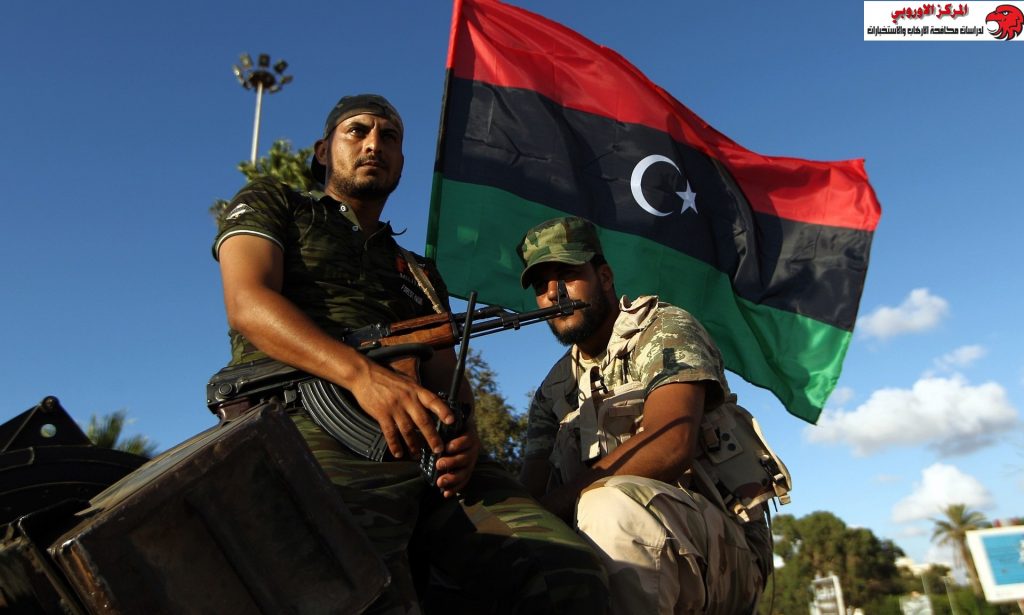 Since 4 April, the beginning of Field Marshal Haftar’s offensive against Tripoli, the battle between his forces and forces loyal to the GNA has resulted in 1,100 deaths, including 106 civilians. The conflict has intensified, with the use of armed fighter and drone strikes, and extended: Khalifa Haftar’s National Liberation Army (NLA) rear base in Al-Jufra (centre) was recently bombed, as was the airbase Misrata, used by forces loyal to the GNA, and Mitiga airport in Tripoli.

Foreign Interferences and Military Interventions in Libya: A Fuel for Terrorist Groups

The rise of extremist and terrorist groups in Libya has also been directly related to foreign foreign interference and military interventions. These interventions have dismantled state structures in the country, unleashed dormant ethnic and sectarian tensions and, by altering regional balances of powers, have intensified regional rivalries. These developments have provided breeding grounds for the emergence of new terror groups often supported by external actors.

In Libya, there are some foreign interferences and military interventions were partly rationalized in terms of fighting terrorism. Thus, ironically, “fighting terrorism” became the catalyst for the emergence of new extremist and terrorist groups in Libya. Extremist groups in Libya also are the product of deep-seated economic and political grievances as well as radical ideologies of secular or religious variety, plus the manipulative policies of key regional and international actors.

There is a clear mobilization in both camps towards Tripoli, which created a security vacuum, which gave an opportunity for extremist and terrorist groups to come back, but also by recruiting and allied with other groups and coordinating attacks to “prove their existence.”  The dispute between Libyan factions also gave the terrorists a golden opportunity to move and reshape their fugitive remnants and sleeper secret cells.

The danger of the ability of extremist terrorist organizations to control a specific place remains, as long as Libya is divided, and state power has not been extended to all the territories. Given the current conflicts, terrorism in Libya will be only one force among many forces, capable of inflicting vital and strategic damage.

The extremist and terrorist groups re-emergence as a result of the Libyan chaos,  would also have wider repercussions for the region, unsettling neighbouring Tunisia, extremist and terrorist groups in Libya may send jihadists to carry out terrorist attacks in Tunisia, as Tunisia remains under-professional in the issue of border protection and the fight against terrorism. So weeks later of Hifter’s offensive on April 4, Tunisia’s political class says it is once again feeling the repercussions of its neighbours’ civil war and fears it could get worse. The impact of the Libyan war in Tunisia is more or less strong depending on the period since the overthrow of Muammar Khadafi in 2011, an event that disrupted trade between the two countries and led to migration wave to Tunisia, creating fears about an infiltrated jihadists.

Turkish Military Intervention and the Risks of Radicalisation

Turkey’s parliament authorized the government to deploy troops to back Libya’s internationally recognized administration against rival forces, deepening a proxy war that’s drawn in Russia and regional powers. The parliament on Thursday voted 325 to 184 to give President Recep Tayyip Erdogan a one-year mandate to dispatch troops at the request of the government of Libyan Prime Minister Fayez al-Sarraj.(1)

Bassel Al-Turjuman, terrorist groups affairs’ UN expert and adviser said that Turkey has plans to redeploy thousands of terrorist elements in North Africa, particularly Libya. He pointed out that the Islamic State organization is aiming at redeploying its elements in Libya to exploit the ongoing armed conflict in Tripoli and a security vacuum due to the preoccupation of the Libyan National Army (LNA) forces in the Tripoli war. Al-Turjuman confirmed the circulating news about a Turkish intelligence alleged task to transport thousands of ISIS fighters from the Syrian territories to southern Libyan borders, warning of the dangers of terrorists returning to Libya and other North African countries. (2)

Isis’s return is now more likely as chaos spreads in the wake of the planned Turkish intervention. The group is well positioned, with large quantities of weapons in all four corners of Libya, and frightening smuggling networks in the inner desert of the state extending to the ISIS branch in Sinai (Ansar Bayt al-Maqdis) and even Gaza (Omar Hadid’s company). Introducing Syrian rebels who have worked alongside extremist groups such as Jabhat al-Nusra, al-Qaeda’s Syria branch, could provide a more fertile environment for Islamic militancy.  Extremism in Libya has become a serious security issue, affecting neighbouring countries, including European countries. This phase of the war may see such ideologies spread, entrenched, as violence escalates, and the agendas of states that are only concerned with their interests are revealed.