How Europe’s terrorists take advantage of the pandemic 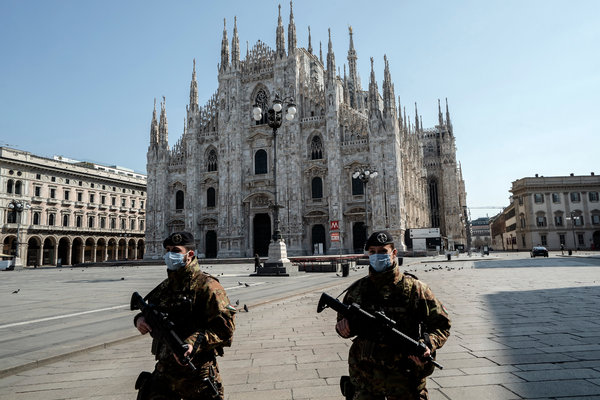 The Covid-19 pandemic leaves no one unaffected, including terrorists.

European terrorist networks are torn between protecting their own members against the virus and using the pandemic to further their goals. This causes immediate and long-term effects on terrorism in Europe. Like many state and other non-state actors, terrorist groups manipulate the global pandemic in their radical narratives. They do so to unify their followers, attract new sympathisers, and further their objectives.

Daesh sees in the coronavirus “a torment sent by Allah to his enemies”. China would be particularly hard-hit as punishment for its treatment of Uighur Muslims, and it is no coincidence that Iran’s holy Shiite city Qom is one of the new epicentres of the outbreak. Far-right terrorists also blame their enemies hoping to radicalise others and promote their goals. They see the pandemic as a result of a biological weapon deployed by China, aimed at destroying Western powers, or blame migrants for causing its spread.

Terrorist groups also use the pandemic to gain visibility. Daesh, for instance, has been exploiting hashtags related to the coronavirus to redirect users to their radical propaganda. European extremist groups also capitalise on current fear and chaos to incite followers to commit attacks. Neo-nazi groups encourage supporters to stir panic during the coronavirus outbreak and anarchist groups have called on members to commit attacks, as police forces would be overburdened with corona-related tasks.

The coronavirus pandemic has already caused high numbers of deaths, massive economic disruption, and had a huge impact on the daily lives of millions of people. In short, everything terrorists would want to achieve with their attacks. No surprise thus that the global pandemic serves as inspiration and influences the modus operandi of terrorists, both in terms of tactics and target selection.

Terrorist networks have encouraged followers to weaponise their own illness by trying to infect others. The pandemic might also serve as inspiration for their long-term strategies, leading to a potential rise of attempts to commit biological attacks. Similar attacks occur fortunately very rarely; the most significant bio-terror attacks to date are a salmonellosis outbreak in Oregon, committed by the Rajneesh sect in the mid-80s, and the more than two dozen anthrax or ricin-laced letters in the early 2000s.

Terrorists have also found inspiration in the global pandemic with regards to their target selection, in particular critical health infrastructures. Recently, the FBI killed a far-right terrorist, who had accelerated his attack plan and changed the target to a hospital treating Covid-19 patients. For terrorists, the current crisis also serves as an ideal case study to learn about the threats and effects of atypical warfare methods and could thus inspire them to adopt innovative attacks, such as disruptions in the food supply or medicine and other health supplies. ‘Apocalyptic-ism’ plays an important role in many terrorist narratives.

Violent extremists thus will most likely play out the apocalyptic narrative of the pandemic to spur their supporters to action. Jihadist groups have seen in the coronavirus pandemic a sign that the world is approaching the Day of Judgement. In the past, a similar doomsday narrative has served as a crucial recruiting pitch for foreign fighters to fight with Daesh in the final battles of the apocalypse. Also right-wing extremists, who believe the world is heading towards a genocidal race war, might see in the apocalyptic scenarios of the pandemic a call for violent action.

The Covid-19 outbreak could also lead to a rise of violent actions by the hands of environmental extremists. Economic difficulties, a lack of public support, and more urgent needs might thwart advances in the global warming agenda and interrupt green investments by national governments. Moreover, having witnessed the immediate environmental benefits due to radical actions like a global lockdown and economic disruption, eco-activists could be triggered to resort to violence.

The pandemic is showing its first effects on terrorism. The global pandemic could, however, also have a long-term impact on Europe’s counter-terrorism measures. Particularly worrying is the risk of a possible application of epidemiological tracking tools for counter-terrorism purposes. Both democratic and non-democratic countries have, under the exceptionalism of emergency laws and with various degrees of invasiveness, introduced wide-spread contact and movement digital tracking tools aimed to determine the whereabouts of an infected person.

A future ‘national emergency’ situation, in the aftermath of a major terrorist attack, could pave the way for adding such apps to the counter-terrorism toolbox. However, similar wide-spread and systematic analytical tools to survey the spread of radicalism would not only threaten a number of fundamental rights, but would also be ineffective. Based on an idea that radicalisation is contagious and spreads by the mere interaction between people, it would risk increasing stigmatisation and other grievances among segments of the population and eventually create new breeding grounds for extremism in the EU.