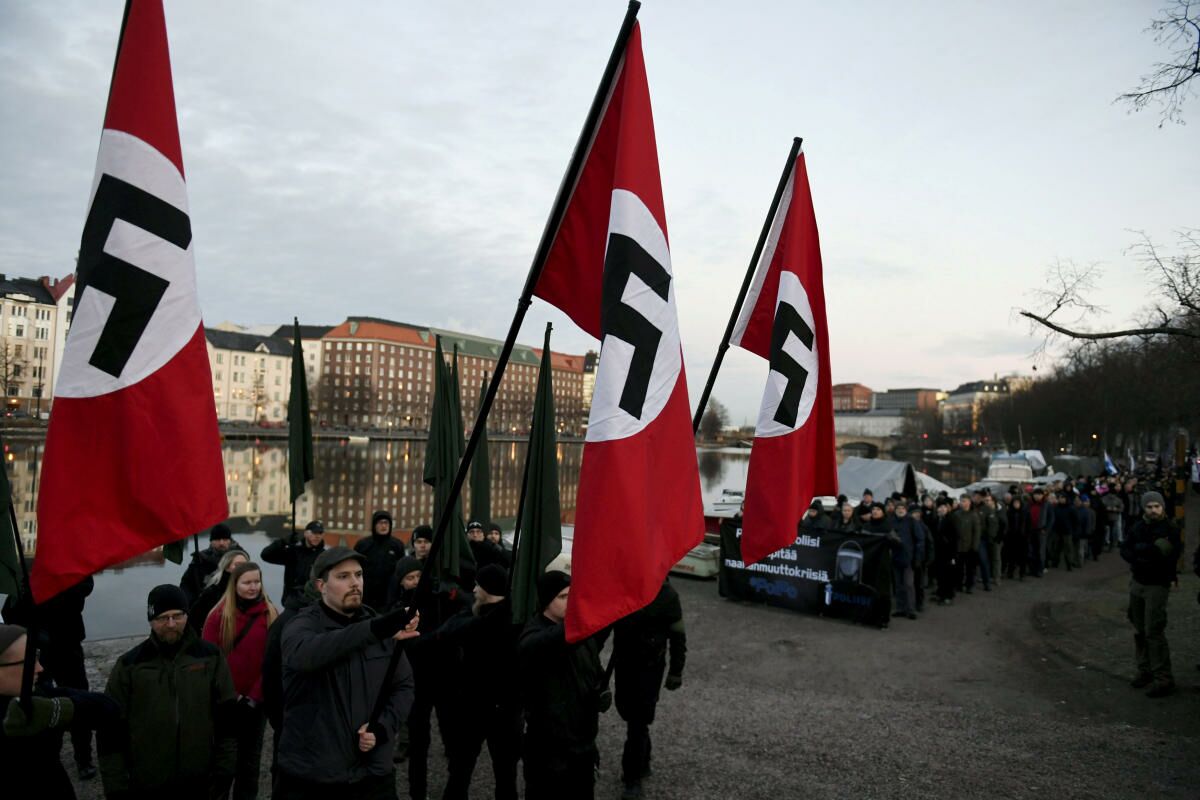 German neo-Nazis have been getting military-style training at camps run by a far-right Russian terrorist organization, German media reported Friday, in the latest sign of deepening international cooperation between white supremacist networks.

Citing intelligence sources, German news magazine Focus reported that the extremists had attended a camp held near Saint Petersburg, where they were shown how to use weapons and explosives, and received close combat training.

The training camp, known as Partizan, is run by the Russian Imperial Movement (RIM), an ultranationalist, quasi-paramilitary organization which claims to be fighting for the “predominance of the white race.”

The U.S. government added RIM to its list of specially designated global terrorist groups in April — the first time it had taken such action against a white supremacist organization — saying it had “provided paramilitary-style training to white supremacists and neo-Nazis in Europe.”

The Russian government considers RIM to be extremist, but has not banned the group.

The German extremists who attended the camp belonged to the youth wings of two fringe German political parties widely considered to be neo-Nazi movements: the National Democratic Party and The Third Path. The Focus report did not provide further details of their attendance at the camp, but said that extremists from Sweden and Finland had previously attended the camps and gone on to fight in pro-separatist militias in eastern Ukraine.

Experts told VICE News that the German attendance at the camp highlighted the growing cooperation between white supremacist groups internationally, as they sought to build relationships with allies in other countries.

“It signals that RIM is a critical node in the transnational white supremacy extremist movement,” said Mollie Saltskog, intelligence analyst at The Soufan Group. “RIM is going beyond networking and ideology, and is actually providing paramilitary training to individuals who adhere to this violent ideology.”

Kacper Rekawek, an affiliated researcher for the Counter Extremism Project, said that Russia and Ukraine had become important hubs for the transnational white supremacist movement, where permissive government attitudes towards militant far-right groups has effectively created a safe space for extremists to network or receive military-style training.

“I don’t think these [German] guys would be able to do this sort of thing anywhere in Europe,” he told VICE News.

Like Ukraine’s far-right Azov movement, RIM’s standing in the international white supremacist scene has been boosted by its involvement in the war in Ukraine, where its military wing, the “Imperial Legion,” fought on the side of pro-Russian separatists.

Rekawek said RIM had acted as a “conveyor belt” for fighters into the Ukraine conflict, amplifying its appeal to extremists from other countries who wanted to increase their capacity for violence.

“They have the street cred,” he said. “They’re saying, ‘We’ve got the experience, we’re the real deal.’”

While no Americans are known to have participated in the camps, RIM has also forged ties with American white supremacists. According to a report by The Soufan Center, RIM developed close ties with Matthew Heimbach, founder of the neo-Nazi Traditionalist Worker Party in the U.S., and an organizer of the infamous Unite the Right rally in Charlottesville, Virginia. Heimbach, who claims to have renounced his white nationalist views, welcomed a RIM delegation to the U.S. in 2017, and had reportedly received invitations to train with RIM, said Saltskog.

She said the main fear of intelligence services was that the extremists would return home and carry out acts of violence in their own countries, like two Swedish neo-Nazis, Viktor Melin and Anton Thulin, who attended an 11-day RIM training camp in August 2016, before carrying out a series of terrorist attacks in the Swedish city of Gothenburg a few months later.

According to the State Department, which cited the Swedish bombings as a justification for designating RIM a terrorist organization, the Swedish prosecutor who dealt with their case found RIM was responsible for radicalizing them into action and giving them the expertise to carry out the attacks.

“The tacit knowledge transfer, for example when it comes to bomb-making … presents a great threat to the countries these individuals are from,” said Saltskog. She said the latest report out of Germany was further evidence that the U.S. decision to sanction RIM as a global terrorist group was justified.

“In my opinion, the threat is no different than if a German or Swede would travel to participate in an ISIS or al-Qaeda training camp.”