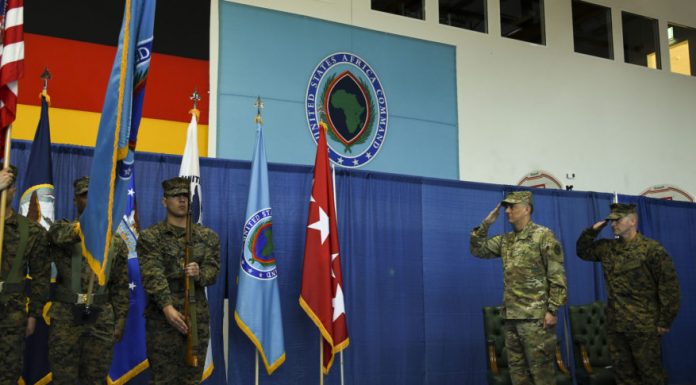 U.S. Africa Command has been ordered to make plans to move out of its headquarters in Stuttgart, Germany, its commander announced in an early morning media release.

“U.S. Africa Command has been told to plan to move,” AFRICOM commander Army Gen. Stephen Townsend said in the release. “While it will likely take several months to develop options, consider locations, and come to a decision, the command has started the process. We will ensure we continue to support our host nation and African partners and our families and forces throughout.”

It’s the latest move by President Donald Trump to pull U.S. troops and resources from a key European ally. On July 29, Defense Secretary Mark Esper announced that nearly 12,000 U.S. troops will pull out of Germany as soon as is feasible. There are currently 36,000 there. As part of that plan, Esper announced that two headquarters elements — U.S. European Command and Special Operations Command Europe — would out of Stuttgart to Mons, Belgium, according to U.S. European Command boss Air Force Gen. Tod Wolters.

At the July 29 press conference announcing those decisions, it was hinted that AFRICOM could move out of Germany as well. Early this morning, Townsend confirmed he has been ordered to make plans to do so. The command could move elsewhere in Europe or even to America.

“In response to the President’s direction, efforts are now underway to develop plans and options to relocate AFRICOM headquarters and forces from Germany,” according to the release. “The command will look first at options elsewhere in Europe, but also will consider options in the United States.”

The command stood up in 2008 “to protect and advance U.S. national interests in Africa and develop capable, professional partner nation military forces there and has been headquartered in Stuttgart, Germany, since its inception,” according to the release.

“It is important our African partners understand our commitment to them remains strong,” said Townsend. “U.S. Africa Command will continue to work with our African and other partners to address mutual interests.”

The plans to move AFRICOM come as Trump continues to blame Germany for not contributing enough to its own defense.

As Pentagon leadership briefed reporters July 29, the president answered questions about Germany and NATO on the White House lawn.

“Germany is not paying their bills,” he said. “They’re delinquent. It’s simple.”

A non-mandatory target has NATO members paying 2 percent of their gross domestic product toward shared security costs by 2024, but few of those countries are meeting that benchmark. That includes Germany, at an estimated 1.38 percent in 2019, but also Italy and Belgium ― who paid an estimated 1.22 percent and 0.93, respectively, last year. Poland has reached that goal.

“Let’s be clear: I think Germany is the wealthiest country in Europe. Germany can and should pay more to its defense,” Esper said. “It should certainly meet the 2 percent standard, and I would argue, go above and beyond that.”

The Pentagon’s plan was focused on maximizing readiness and reassuring allies, Esper said, while at the same time under pressure from the president, who has repeatedly targeted Germany.

While Esper had hinted at rejiggering Europe force structure last year, he said that Trump’s rhetoric “accelerated” the plan.

Under the plan, troop levels in Germany would drop from 36,000 to just over 24,000, Defense Secretary Esper told reporters, with 5,600 of those re-positioned to other European countries and the remainder shifting to U.S. bases to be determined.

“I want to note that this plan is subject to, and likely will, change to some degree as it evolves over time,” Esper said July 29.