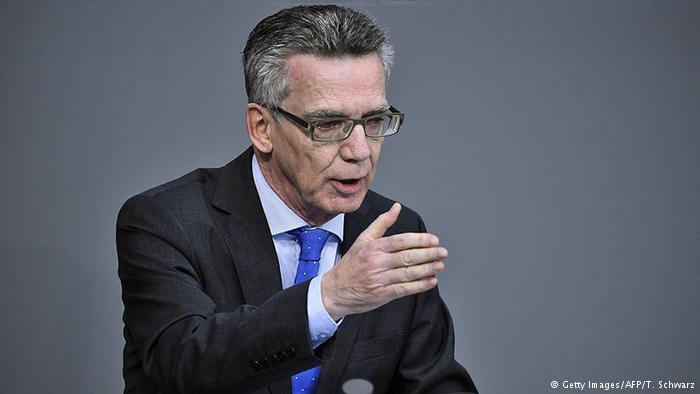 In an interview with the German public broadcaster ARD, de Maiziere claimed that the organizers of the PEGIDA group were

‘hard right-wing extremists.’ The group is preparing to hold another rally in Dresden.
“They make blanket references to asylum seekers as criminals, and all politicians as being guilty of high treason,” de Maiziere told the ARD television channel, alluding in part to the knife attack on Cologne mayoral candidate Henriette Reker, which was apparently in protest of the city’s policies on the intake of refugees. Workers who help migrants in the city were also wounded in the attack on Saturday.
The minister referred to a tripling of attacks against asylum seekers since last year as “horrifying,” and urged people – even those who did have concerns about the migrant influx – not to follow PEGIDA. “Hate prepares the ground for such acts,” he said.
“Stay away from those who are injecting this hatred, this poison, into our country,” he said in the interview on Sunday night. “Anyone who goes that way should know that they are following rabble rousers.”
Danger to unaccompanied minors
The ministerial appeal came as PEGIDA, whose name means “Patriotic Europeans Against the Islamization of the West,” prepares to stage another of its marches in Dresden on Monday evening to mark the one-year anniversary of its foundation.
The interior minister also warned of the danger posed by ultra-conservative Salafists in Germany trying to reach out to newly-arrived refugees. Of particular concern, he said, was the likelihood that they would target – among others – unaccompanied minors who had found themselves alone in Germany.
“That is a big concern that we have,” said de Maiziere, adding that greater efforts would be made to shield youngsters. “The care will get better,” he said.
De Maiziere said “There is no room for hate and violence in our country.”
He also played down a call by German police union chief Rainer Wendt for a fence to be built along the country’s southern frontier to prevent illegal entry of the country across its so-called “green borders.”
Questionable timing of visit
Quizzed about the visit of Chancellor Angela Merkel to Turkey, de Maiziere said that compromises would need to be reached with the country to help stem refugee numbers. “One of the main keys lies with Turkey, because a lot of people are coming from there – and there needs to be a compromise of European and German interests and Turkish interests,” he commented.
Appearing on the same television program, “Bericht aus Berlin,” (Report from Berlin) the co-leader of German opposition party the Greens, Cem Özdemir, questioned the timing of Merkel’s visit to Turkey.
“It is right that we talk to Turkey, it is right that we help Turkey with taking in refugees – Turkey has taken very many refugees. I do ask myself however, if now – shortly before the election in Turkey on November 1 – is the right time. It works as an election aid for Mr. Erdogan,” Özdemir said.
rc/jm (dpa, Reuters)