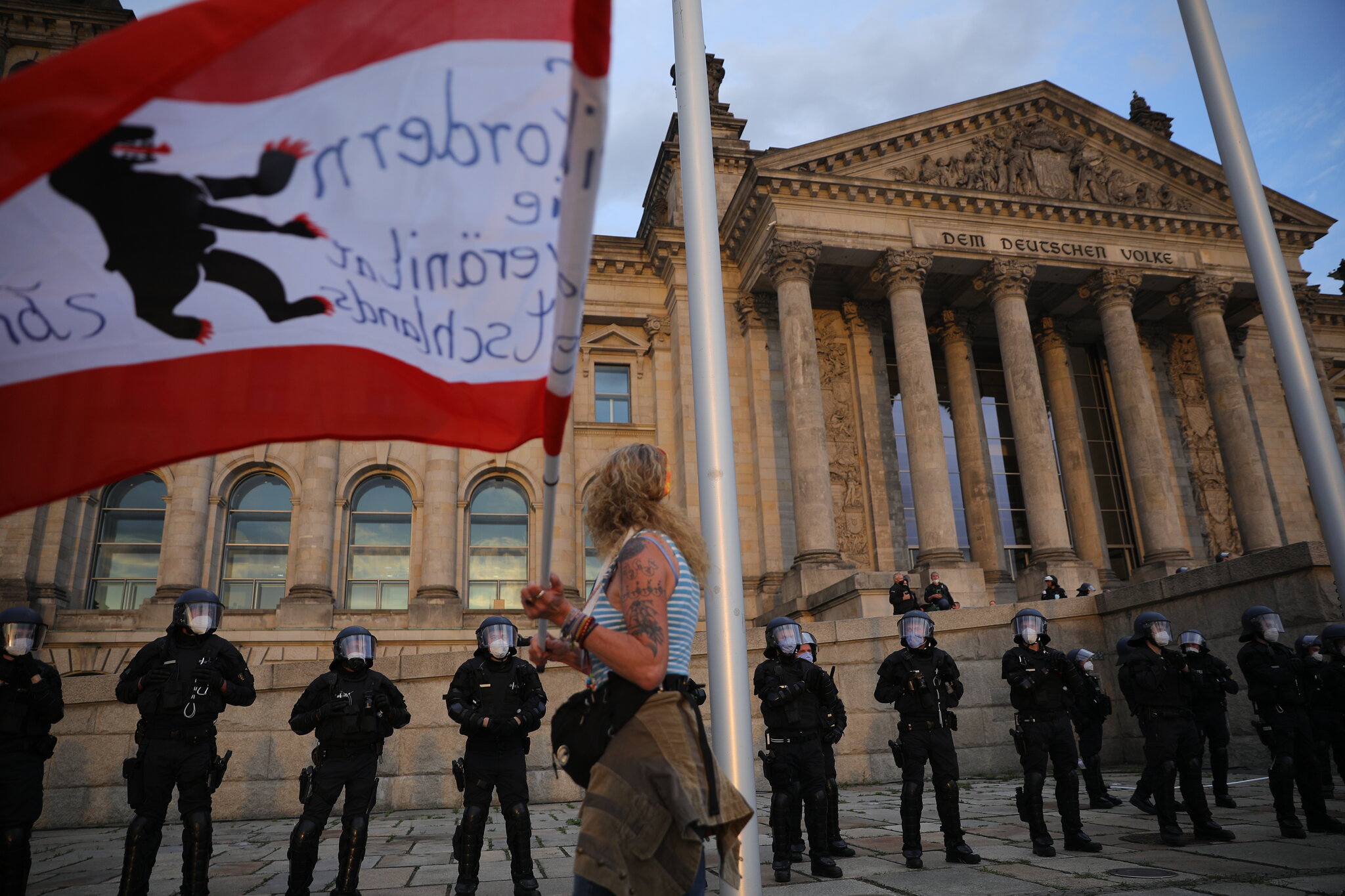 European Centre for Counterterrorism and intelligence Studies-Germany and Netherlands

Germany has handled the pandemic well and its government enjoys high public trust. But the minority opposing coronavirus rules includes a far-right faction that worries officials.

It was shortly after 7 p.m. when a self-described healer got on stage outside the German Parliament and urged the jeering crowd of protesters to storm the building: “There is no more police!” she shouted. “We have won!”

What followed was a scene many Germans thought had been confined to their history books: Hundreds of far-right activists waving the black, white and red flag of the pre-1918 German Empire that once inspired the Nazis broke through a police barrier and tried to force their way into the building.

It took only a few tense minutes before the police, though vastly outnumbered, managed to push them back. But Saturday’s events marked an alarming escalation of the protests against Germany’s response to the pandemic that have grown steadily bigger and — on the fringes at least — angrier.

Strikingly, that outpouring of anger comes at a time when Chancellor Angela Merkel’s government is enjoying high levels of trust and popularity, and the great majority of Germans approve of its virus control measures. Germany has managed the pandemic well, keeping the number of deaths low, reopening schools and pumping billions of euros into welfare programs that so far have kept unemployment at bay.

Small as they are in numbers, though, the group who tried to take over the historic Parliament building, the Reichstag, prompted shocked responses and grim comparisons to Germany’s past.

“The fact that Nazis with imperial war flags try to storm the Bundestag recalls the darkest period in German history,” Robert Habeck, the co-leader of Germany’s Green party, told the Funke media group.

“It is intolerable that the Reich flag should fly again at the German Parliament,” said Annegret Kramp-Karrenbauer, the head of Chancellor Angela Merkel’s center-right party.

Germany’s president, Frank-Walter Steinmeier, called it “an unbearable attack on the heart of our democracy.”

Some 38,000 protesters from all over the country flocked to the German capital last weekend, the biggest number since the marches started in April. It was an eclectic crowd. There were anti-vaxxers like Robert F. Kennedy Jr., anticapitalists, esoterics, ordinary citizens angry at having to wear face masks — but also about 3,000 members of the far-right scene.

“We have everything from Hare Krishna fans to Adolf Hitler fans on the streets,” said Matthias Quent, an expert on far-right extremism and the director of an institute that studies democracy and civil society. “It’s a very disparate crowd but what unites people is an angry discontent with the establishment. It’s a mix of populist and egoist outrage.”

The far-right Alternative for Germany party, or AfD, has tried to exploit the pandemic in the same way it used the refugee crisis in 2015, when the government accepted more than one million migrants into the country, to feed a narrative of impending crisis and government failure.

The migrant wave helped propel the AfD into Parliament in the last election, but the issue has lost much of its political potency, as the resettlement has been broadly deemed a success. And with its own lawmakers and voters deeply split over the country’s coronavirus measures, the party has seen its share of the vote dip below 10 percent in recent polls.

In all, only 9 percent of Germans support the protests, polls suggest. And only one in 10 Germans say they disagree with virus-prevention measures like the requirement to wear masks on public transport, in stores and in public buildings including schools and libraries.

Almost eight in ten Germans said they would like to see greater compliance with pandemic controls, and some 28 percent said the measures were not strict enough.

“They shout ‘We are the people,’ but they’re not,” Mr. Quent said of the protesters who swarmed the Reichstag.

“In Germany, like many other European countries, we see that far-right parties are losing ground, that there is growing trust in incumbent governments,” Mr. Quent said. “In the short term the pandemic can’t be exploited by far-right parties.”

If the economy deteriorates further and unemployment rises, that equation may change, he said. Already, the AfD and more extreme far-right groups are trying to capitalize on the discontent as they begin positioning themselves for what may be a much uglier political scene some months from now.

What worries officials and extremism experts more immediately is that even if the far right is a minority at the protests, it is radicalizing. Among those calling on supporters to join the protest on Saturday were Björn Höcke, an AfD firebrand, and Martin Sellner, star of the extremist Generation Identity movement, both of whom have been classified as far-right extremists by the domestic intelligence service.

Message boards are flush with far-right conspiracy theories and prepper groups, which have long fantasized about a crisis so deep that it would lead to the collapse of Germany’s liberal order. Ahead of Saturday’s protest, which the city government had tried to block before being overruled by a court, several public groups on the messaging app Telegram had called for a “storm on Berlin.”

Some had posted photos of themselves and their weapons. “That is very unusual for Germany,” Mr. Quent said.

The authorities are on high alert. Over the past 14 months, far-right terrorists have assassinated a regional politician on his front porch near the central city of Kassel, attacked a synagogue in Halle, in the east, and in February, killed 10 people in the west, in Hanau. Even before the pandemic hit Germany, far-right extremism and far-right terrorism had been officially identified as the biggest danger to the country’s democracy.

At the coronavirus protests on Saturday, far-right activists actively courted police officers deployed to secure the march, urging them to switch sides.

There have been several cases of police officers joining such protests, according to Robert Andreasch, a journalist who has been documenting their appearances. Two active police officers, a retired officer and one who was recently suspended were speakers at the rally on Saturday, one of them referring to a “so-called pandemic” and urging protesters to seek information outside the “mainstream media.” Another spoke of “mask slavery.”

Meanwhile, it was three police officers who stood their ground on Saturday at the entrance to the Reichstag, the historic Parliament building, and held off the angry mob. A video of the three men pushing back against the demonstrators for several minutes before reinforcements arrived has gone viral in Germany.

It also ignited an uneasy debate about how to better protect the Reichstag. It is a point of pride that the building dedicated to “The German People,” as the inscription above its portico reads, remains open to those very people.

The best-selling tabloid Bild has called the police officers who protected it “heroes” and on Monday, President Steinmeier received them at his residence to officially thank them. “Far-right extremism has deep roots in our society,” Mr. Steinmeier said. “It is a serious danger.”