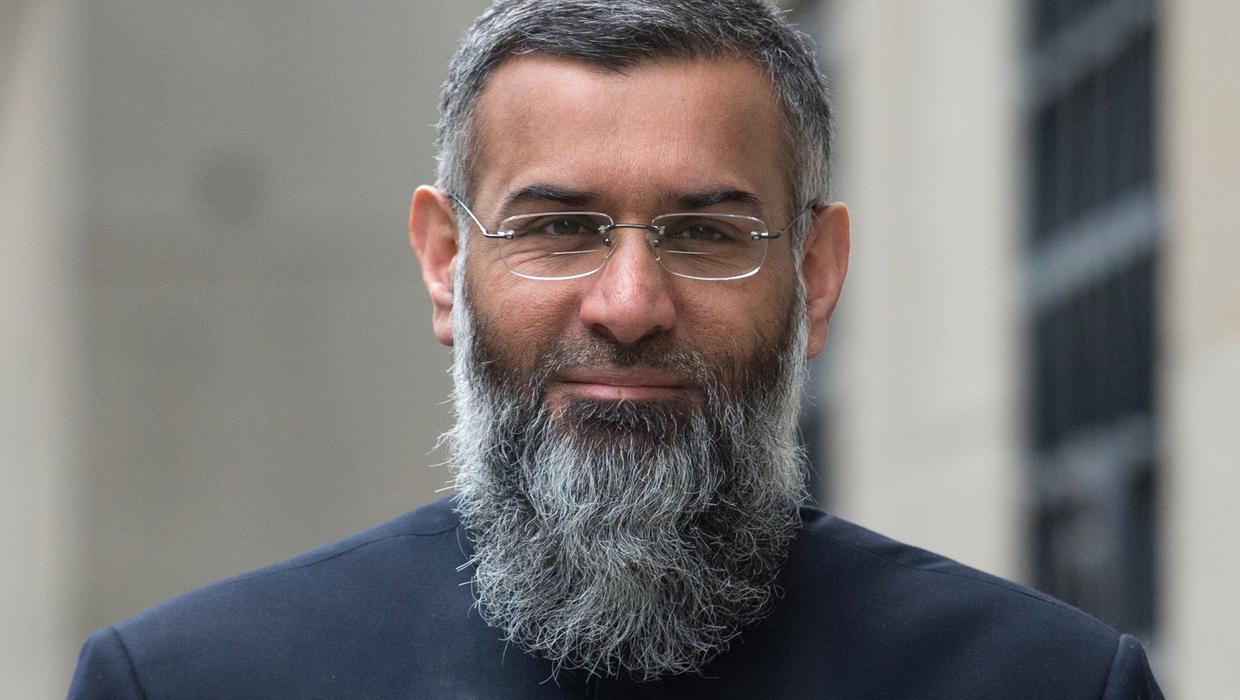 Independent – Anjem Choudary is openly orchestrating online campaigns in support of hate preachers and extremists despite his terror conviction, it can be revealed.Choudary has organised a series of “Twitter storms” from the encrypted messaging app Telegram, where he is directing followers under his own name.Research by the Community Security Trust (CST), which works to protect Jewish people in Britain, found that over two months his efforts had resulted in around 43,000 mentions on Twitter.It comes as measures to prevent online hate and legal powers to tackle extremism face increased scrutiny following the murder of Conservative MP David Amess.Dave Rich, the CST’s director of policy, told The Independent: “Choudary has spent decades finding loopholes in our legislation that still haven’t been closed.

“It feels like we have turned the clock back 20 years to a time when Choudary could spread his hateful views and attract new followers with impunity – except now he has the megaphone of social media to help him do it.”Mr Rich said it was vital that the new online safety bill takes the responsibility for combating extremist activity away from social media companies that have been “either unwilling or unable to prevent well-known extremists from exploiting their technology”.A ban preventing Choudary from public speaking expired three months ago alongside other licence conditions, after he completed his sentence for inviting support for Isis.

He was jailed in 2016, was named a Specially Designated Global Terrorist by the US government in 2017 and was added to a UN sanctions list for being “associated with Isis” the following year.The Independent understands that police and the security services are still monitoring Choudary and other freed terror convicts linked to his al-Muhajiroun network, and consider them a major concern.But Choudary, a former solicitor, has proven adept at skirting legal boundaries for decades and there are no restrictions currently in place to stop his activism.He has been publishing calls for Twitter storms to take place every Friday on Telegram, and sending out a series of posters and images to use in campaigns under set hashtags.

The channel had almost 300 followers at the time of writing and was pushing out material in languages including English, Arabic, Dutch and Turkish.As a result, supporters have been sharing Choudary’s “press releases” and posters on Twitter, which has not been removing the posts despite banning the hate preacher from the site.The campaigns have been in support of jailed extremist figures including Omar Bakri Muhammad, who was formerly a leading figure in the banned al-Muhajiroun Islamist network alongside Choudary, as well as hate preacher Abu Hamza and Fouad Belkacem, the former head of Sharia4Belgium.In a message to followers regarding alleged Isis members held in Syria, Choudary wrote that working to free prisoners is “one of the greatest obligations that a Muslim can engage in”.

“A Twitter storm is not much in the spectrum of what we try to achieve in freeing Muslim captives, yet it is something,” he wrote.“It has been shown that it can be used to create awareness about those in captivity, to expose the tyrants and oppressors who hold innocent Muslims in captivity and to motivate Muslims everywhere to do something.”In his Telegram posts, Choudary has also been railing against what he called attempts to “curtail my right to air my views” and bemoaning his inability to use YouTube and other mainstream platforms.Despite links to numerous Isis fighters, terrorist plotters and attackers including Lee Rigby’s killers and the London Bridge ringleader Khuram Butt, he maintains that he supports a “covenant of security” prohibiting attacks on non-Muslims in Britain.

A report released by the government’s Commission for Countering Extremism earlier this year cited Choudary among extremist figures able to “operate with impunity” because of gaps between hate crime and terror laws.The body found that he “exemplified” the government’s inability to effectively address extremist behaviour and had “helped create a climate conducive to terrorism”.“It is alleged that Choudary helped to motivate at least 70 to 100 people to turn to terrorism, yet the authorities did not have the legal means to stop him,” the report added. “The lack of legislation to capture his extremist activity, that fell outside of terrorism, is an example of the continuing policy and legislative failure in restricting the dangerous extremist activity of such individuals.”

The Commission called for changes to the law and a “legal hateful extremism framework” that could be utilised against Choudary and others, but the government has not enacted any of its recommendations.Giving evidence to the Manchester Arena bombing inquiry this week, a senior Home Office official said he had not seen the report.Shaun Hipgrave, a director in the Office for Security and Counter-Terrorism, admitted he was unaware of any of the Commission’s recommendations until being directed to them by the inquiry on Tuesday.During prime minister’s questions on Wednesday, the Labour leader Sir Keir Starmer asked Boris Johnson why the government had not responded to the report or moved to “plug gaps in existing legislation and strategy”.

He added: “If we are to get serious about stopping violent attacks, we must stop online spaces being safe spaces for terrorists.”Mr Johnson did not commit to implementing the Commission’s recommendations but said the government was committed to tackling online harm and violent extremism.A Twitter spokesperson said: “Twitter’s top priority is keeping people safe, and we remain vigilant about coordinated activity on our service.“Using both technology and human review, we proactively and routinely tackle attempts at platform manipulation and mitigate them at scale by actioning millions of accounts each week for violating our policies in this area.

“We are constantly improving Twitter’s auto-detection technology to catch accounts engaging in rule-violating behaviour as soon as they pop up on the service, and we take action when we identify any Tweets or accounts that violate the Twitter rules.”