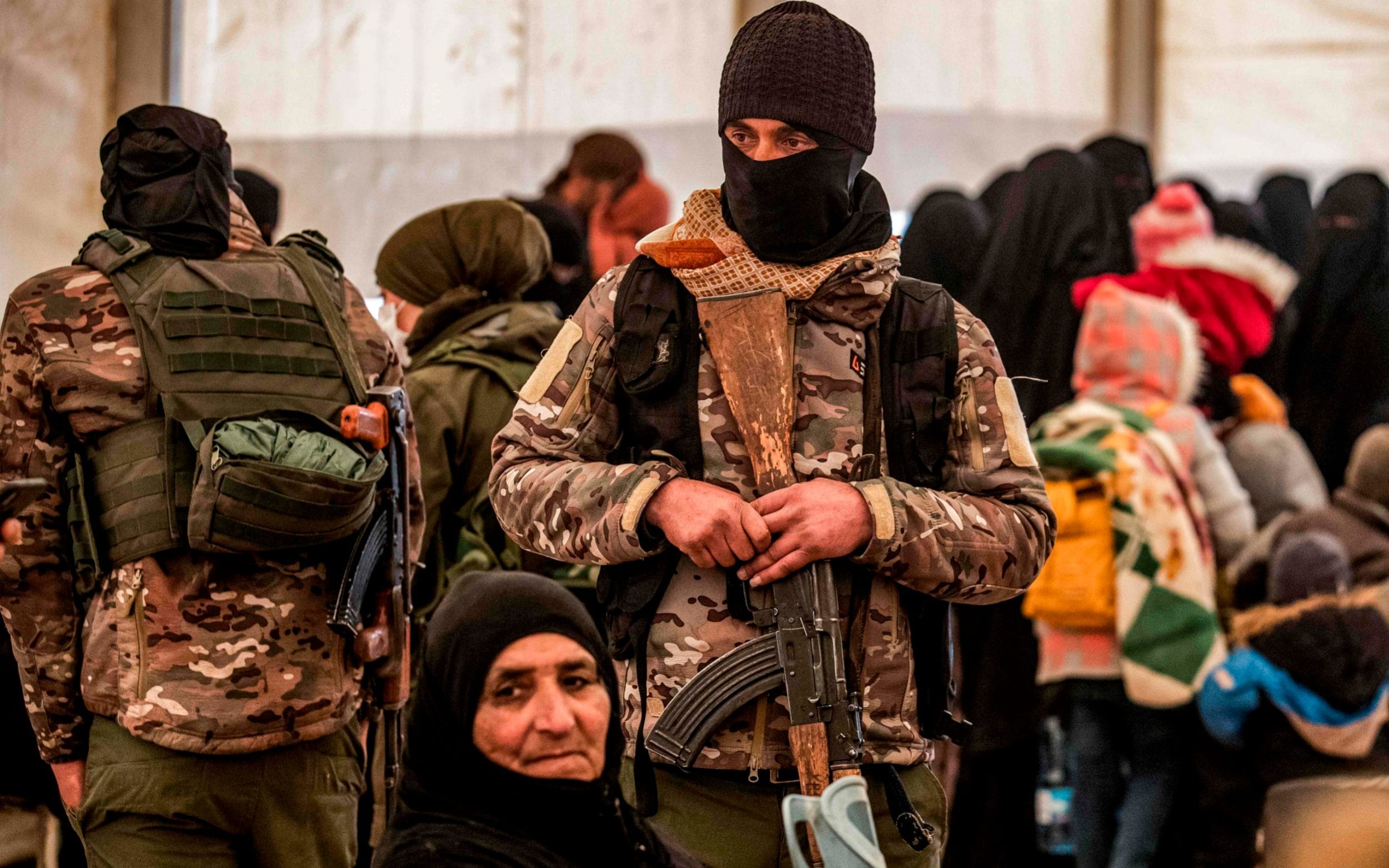 Most of the women we meet in al-Hol camp, a detention center in northeastern Syria, won’t talk about the murders. But Umm Mustafa, from Iraq, speaks quickly and quietly, standing away from the crowds in the market.

It is not the roughly 80 killings so far this year in al-Hol that she finds shocking, but the people who have been arrested. Those believed to be responsible for the killings are women from the Hisba, the self-appointed Islamic State-styled religious police inside the camp.“But it’s their right,” Mustafa explains, defending the military’s right to arrest members of the Hisba. “They killed people who work with the administration, so the administration arrested them.”Sharing information with the administration, meaning the guards, is considered one of the gravest sins against IS in al-Hol camp. The guards are members of the Syrian Democratic Forces, or SDF, a Kurdish-led military that is in large part responsible for the defeat of the so-called caliphate in Syria.

Al-Hol is now packed with more than 60,000 women and children — many wives and offspring of defeated IS militants. In some ways, they live now as they did when the group controlled large parts of Iraq and Syria, under their harsh interpretation of Islamic law. Disobedience is punished with violence.But Um Mustafa wants us to know not everyone chooses to live this way. The camp is locked and the only way out is to be released, transferred or escape.“Everyone here has their own way to raise their family,” she says. “Don’t judge the whole camp by those people.”

In 2018, al-Hol held 10,000 residents, mostly Iraqi refugees.But then came the battle for Baghouz, IS’s last stronghold in Syria or Iraq.As Baghouz fell, the camp filled at an astonishing rate. Tens of thousands of men, women and children fled aerial bombardments and relentless gunfire before surrendering to the SDF. They were IS fighters, their wives, children and others who lived under their rule.

At that time, however, there was an atmosphere of relief. The families were the survivors and many women we met were eager to talk about it. Some wanted to show their support for the caliphate, while others wanted to display their disgust, saying they were happy to be freed from the group, and the veils covering their faces.

Still others seemed confused. “My husband was a cleaner in a mosque,” one woman told us listlessly, hours before being transported to al-Hol. “Does that make me a terrorist?”In one tent in al-Hol, a young mother told us that her religion required that we should be killed, but she would not do it. “Please, stay and have tea,” she added.

As the chaos of the battle for Baghouz died down in the months that followed, families settled into the drudgery of living in a squalid, isolated detention center. Ardent IS supporters among the women appointed themselves to be the Hisba, re-establishing the routines and rules they lived by under IS.Residents started calling al-Hol “Little Baghouz,” and the brief time when you could walk into the camp and hear an array of open opinions or see women’s faces came to a halt.

Not long after that, intelligence officers at the camp started reporting killings, attacks on security personnel, tent burnings and hundreds of escapes. They said weapons and money were smuggled into the camp and that they lacked the capacity to secure it.Many aid organizations were forced out by extremists, or just left. Camp administrators sent out pleas for help from the international community through journalists and nongovernmental organizations. The help they wanted never materialized, and dozens of countries ignored calls to take back their citizens.

Layla Rezgar, a camp official at that time, told us that she couldn’t understand the lack of outside concern. Members of one of modern history’s most brutal extremist groups were gathering weapons and attacking wherever they could. “Why isn’t anyone listening?” she asked.

In the two years since that conversation, the situation has only devolved. Besides ongoing violence, women in the camp appear increasingly despondent.In late October, women mostly ignored our questions about life under IS before the camp, and Hisba rule now.“I don’t want to talk about that,” says Umm Abdullah, a 26-year-old Russian woman. “I want to tell you my problems.”

A crowd soon gathers, and her problems appear to be shared by everyone within earshot. Her 13-year-old nephew was recently removed from the camp, and she wants to go home. Other women chime in, all outraged that boys aged 12 to 14 are being taken from their mothers without their consent, and without any warning.Foreign boys are being brought to the Houri Center, a school for deradicalization, which doubles as a detention center. The boys were brought to Syria when they were small children, but unless their countries take them back, they will be transferred again to adult prisons when they turn 18.

“Where else in the world do people take children from their mothers?” asked a 40-year-old woman, from Xinjiang, China, whose 13-year-old son was recently removed. Like many other women in the market, she calls herself “Ayesha” when we ask her name.Officials acknowledge the harshness of separating families, but say they have no better option if countries won’t take them back.“Several days ago, some journalists went to the al-Hol camp and IS children threw stones at them,” says Farhad Shami, an SDF spokesman. “IS women enforce the IS laws, and women who break these laws are killed.”

A few hours from al-Hol, in al-Roj camp, thousands more foreign wives and children of IS are reputed to be less radical.Still, even there, children throw rocks and small bits of glass at visitors. Last month, 16 tents were burned in al-Roj, in what appeared to be a protest against the guards.Many women leave their faces uncovered and make a point to wear more modern-looking clothes, like colored headscarves and baseball caps. Some women are willing to talk to reporters on camera, saying they hope if people see them on TV as human beings, not just IS wives, their governments might be more sympathetic.

But nearly three years after the fall of Baghouz, says Merika Boudouaia, a 50-year-old French widow who traveled with her husband to Syria in 2014, it is hard to maintain hope that her teenage daughters will have any kind of future at home in France. “I regret, I regret and I regret again,” says Boudouaia, weeping. “I have nothing now and I am tired. I am tired of this life.”