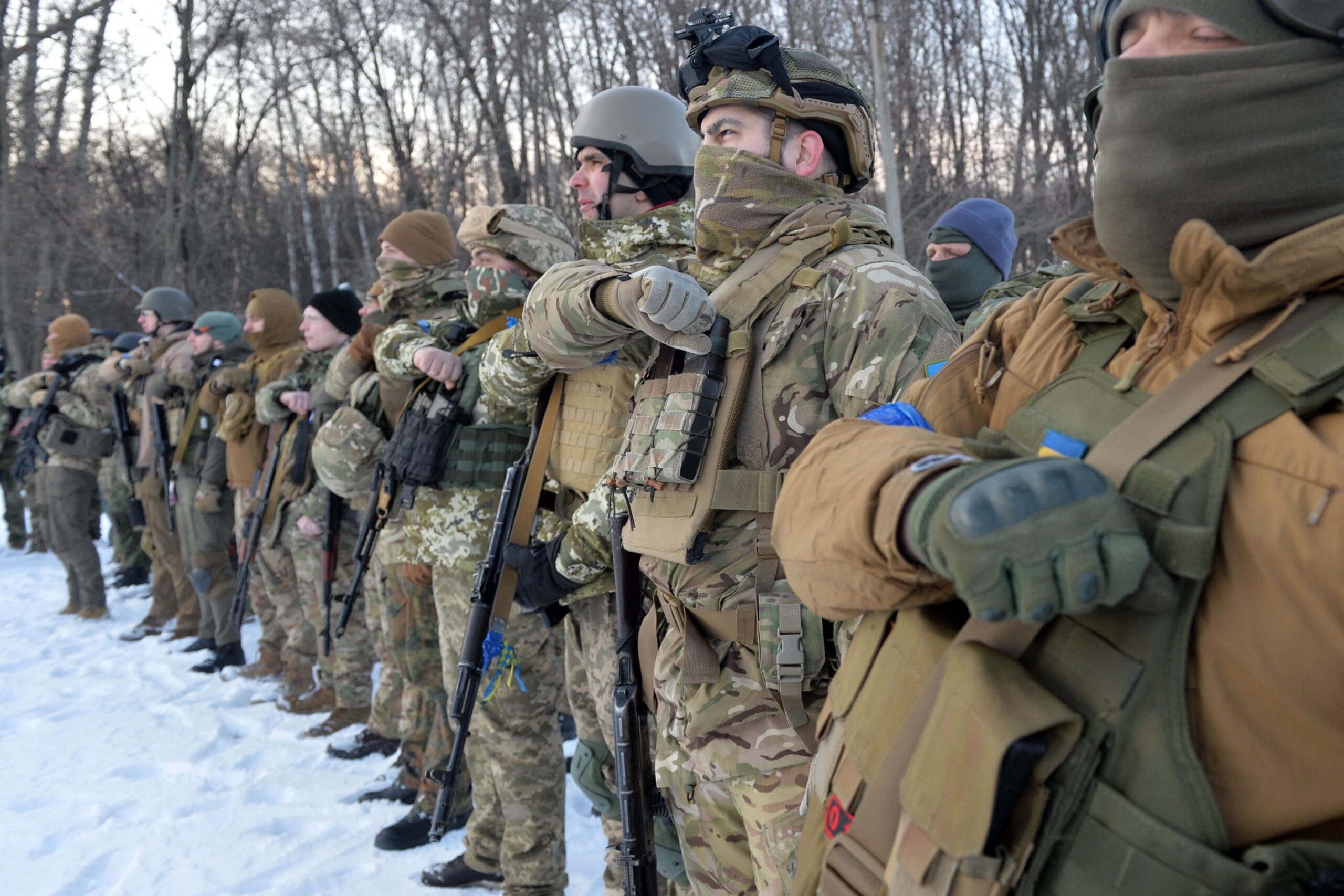 Band of others: Ukraine’s legions of foreign soldiers are on the frontline

Politico  – Up to 20,000 volunteers — from all over the world — have joined up to fight Russian invaders. The commanders say they’re weeding out “bloodthirsty guys” and “extremists.” Commander Mamuka Mamulashvili says he questions the intentions of every volunteer who wants to join his foreign fighter battalion in Ukraine.“I need only one motivation … to save people and save civilians,” Mamulashvili, who leads around 700 soldiers in the Georgian Legion, told POLITICO in a phone interview from an undisclosed location in Ukraine.

“I don’t want bloodthirsty guys who want to come and just shoot somebody.”Mamulashvili has been weeding out recruits with radical views or with ties to right-wing organizations: “We are avoiding extremists — we don’t want them here.”His fighters are now at war with Russia, and he’s looking for more volunteers.A month into President Vladimir Putin’s full-scale assault on Ukraine, fighting groups made up of veterans from abroad are seeing combat.Ukrainian President Volodymyr Zelenskyy said earlier this month that 16,000 foreigners had traveled to his country to fight Russian forces. A few days later, the volunteer ranks were estimated at 20,000, Ukrainian Brigadier General Kyrylo Budanov told CNN.

Mamulashvili commands professional soldiers from dozens of countries, the bulk of which come from the United States, United Kingdom and his native Georgia — which has also been invaded by Russia. He offered a closer look at the work of the Georgian Legion, which has been recruiting and training battalions in Ukraine since April 2014, just weeks after Russia started its annexation of Crimea.Mamulashvili said he has personally led soldiers into battle against the Russian military since Moscow’s full-scale invasion began on Feb. 24. Members of his legion were the first to confront Russians at the airport in Hostomel, in the Kyiv region, he said.

Asked what it’s like on the front line, Mamulashvili says one thing that’s changed during the past eight years of combat is the pounding from above.“It’s airstrikes — permanent airstrikes and ballistic missiles that are shelling us all the time,” he said, adding a no-fly zone could “save a lot of lives.”“Now, while I’m talking with you, I hear heavy shelling. This shelling is not just a sound — it is the lives of children, women and mostly the civilian population. … Bombs are falling on our heads, and we can do nothing.”His group, he said late last week, had only one injury and no deaths.

The Georgian Legion, which has been working on a contract with the Ukrainian armed forces, isn’t the only foreign fighter organization in Ukraine.Zelenskyy established another international legion shortly after last month’s Russian invasion.Cpl. Damien Magrou, a spokesperson for the International Legion of Territorial Defense of Ukraine, says his fighting force is made of a large contingent of British, American and Polish volunteers.But fighters from the Baltic countries and Canada, which has the world’s largest Ukrainian diaspora after Russia, have shown up in sizable numbers. Clusters of soldiers, who know each other well, are arriving together to join the legion.Magrou said he’s welcomed packs of Canadians who fought alongside each other in Afghanistan and even a band of neighbors from the same Georgian village.

“The common feeling for everyone who’s come and signed up in the legion is that we had an urge to do something about it,” Magrou told POLITICO in a phone interview from Ukraine. “We can’t just watch passively as the bombs are falling on civilian targets in the big cities of Ukraine.”Magrou, a Norwegian who has lived in Kyiv for several years, declined to provide specifics on the total number of legionaries or details on how many have come from which part of the world.When it comes to qualifications, Magrou said a military background on its own isn’t good enough. The legion is looking for foreign fighters with live combat experience.“What we want is for people to come that have already been in the line of fire,” he said.

For this reason, Americans with “concrete combat experience” are very attractive candidates.Magrou says U.S. volunteers tend to have backgrounds from a wide variety of conflict zones — everything from Afghanistan, Iraq, Syria, Libya as well as fighters with private contractor experience in Africa.For many of the recruits from Central and Eastern Europe, he said the fight is personal — they’re going to the front lines to defend the region, not just Ukraine.“Kyiv is, in a way, my home as well,” Magrou said of his decision to join the legion as support staff. “And I don’t particularly appreciate being kicked out of my home by invaders, especially not when it’s done with such ghastly brutality.”The legion has already sent units into combat.

“For now, they’re being integrated into local command structures,” said Magrou. He declined to say if any legionaries have been injured or killed, citing the Ukrainian military policy of not commenting on its own casualties. The war’s death toll is believed to already be in the thousands.A NATO estimate this week said between 7,000 and 15,000 Russian soldiers had been killed during the first four weeks. About two weeks after the invasion, Zelenskyy said some 1,300 members of the Ukrainian military had been killed.Russian forces have appeared to target foreign volunteers. This month, Russian rockets killed 25 people in a strike on a military training center in the western Ukrainian city of Yavoriv.

The base, about 15 miles from the Polish border, was training hundreds of volunteers at the time of the attack, according to an ABC News report.Magrou wouldn’t confirm or deny that members of the legion were using the facility at the time. He insisted that no legionaries were injured by the missiles. The legions’ foreign recruits are welcome to bring pretty much any piece of equipment with them, including bulletproof vests, as long as it’s not a weapon.Magrou declined, however, to get into specifics about the weapons and full protective gear that volunteers receive before heading into the battlefield.

At the Georgian Legion, Mamulashvili said only professional soldiers are accepted. Most receive an AK assault rifle and, for those who know how to use them, anti-tank weapons. To Mamulashvili, it makes no difference where the recruits come from.“I’m not counting nationalities,” he said.While most legion recruits have come from Georgia, the U.S. and the U.K., the group has fighters from more than 30 countries.Despite being born under so many different flags, the commander says it’s been “easy” for the soldiers to work together, in squads of roughly 14 people. Many have similar combat experience from such deployments as Iraq and Afghanistan.

While Mamulashvili’s group has combined units of different nationalities, Magrou says the Ukrainian legion has made efforts to keep soldiers together based on country of origin and language.For example, the Canadians in Ukraine’s legion make up a unique contingent.A “large, large majority” of the Canadian recruits are of Ukrainian descent and many have arrived with “old comrades-in-arms” from their tours in Afghanistan, Magrou said.

In Ukraine, Canadians who know each other have been grouped in platoons, along with other English-speaking volunteers.Zelenskyy used an emotional speech to Canada’s Parliament last week to call on Canadians with Ukrainian roots — who number around 1.4 million — to help his country.“This is a historical moment and we need your support — your practical support,” said Zelenskyy, who stopped short of specifics. “We hope that with your practical steps you will show that you are part of more than Ukrainian history.”Magrou said he heard in Zelenskyy’s message an appeal for Ukrainian-Canadians to take up arms against Russia.The Canadian Armed Forces has instructed its members — including those in its regular force, reserves and those on leave — to stay away from the region.

Lt.-Gen. Frances Allen, Canada’s vice-chief of the defense staff, told a parliamentary committee Wednesday that the directive came from Chief of the Defence Staff Gen. Wayne Eyre. The only exception to the prohibition are personnel with approval from Eyre, she said.

Canada has warned would-be fighters about the risks of going to Ukraine’s conflict zone as well as the possibility the Russian regime could use the presence of Canadian mercenaries as part of the Kremlin’s propaganda machine. Allen warned that Russian disinformation may use the engagement of foreign fighters in Ukraine in “counterproductive” ways that could compromise the efforts of Ukraine’s Western allies.Magrou said Georgians have also arrived in groups.“I remember one of the first days we had a large group of Georgians who all came from one small village in Georgia,” he said. “It was like half the village had decided to come and fight.”

The more-established Georgian Legion, Mamulashvili says, has nothing in common with the newer International Legion of Territorial Defense of Ukraine.Mamulashvili himself has an extensive military background and, as a veteran of the Russian-Georgian war, significant experience fighting Russian forces.At 14 years old, he said he and his father — a military general — were captured by Russians. Mamulashvili was swapped for another prisoner after three months in captivity, while his father was held for two years.

“The story of our family’s fight against Russian imperial ambitions takes us very, very deep in history,” he said. “We were fighting Russia for a long time, and for me it became very natural.”When it comes to international support, he has major concerns that not enough people in other parts of the world care about Ukraine.“People are just sitting at the television and watching what’s going on, and doing nothing about it,” said Mamulashvili. “It’s a fight for freedom and for democracy. … I don’t know what the world will look like if Russia occupies Ukraine.”