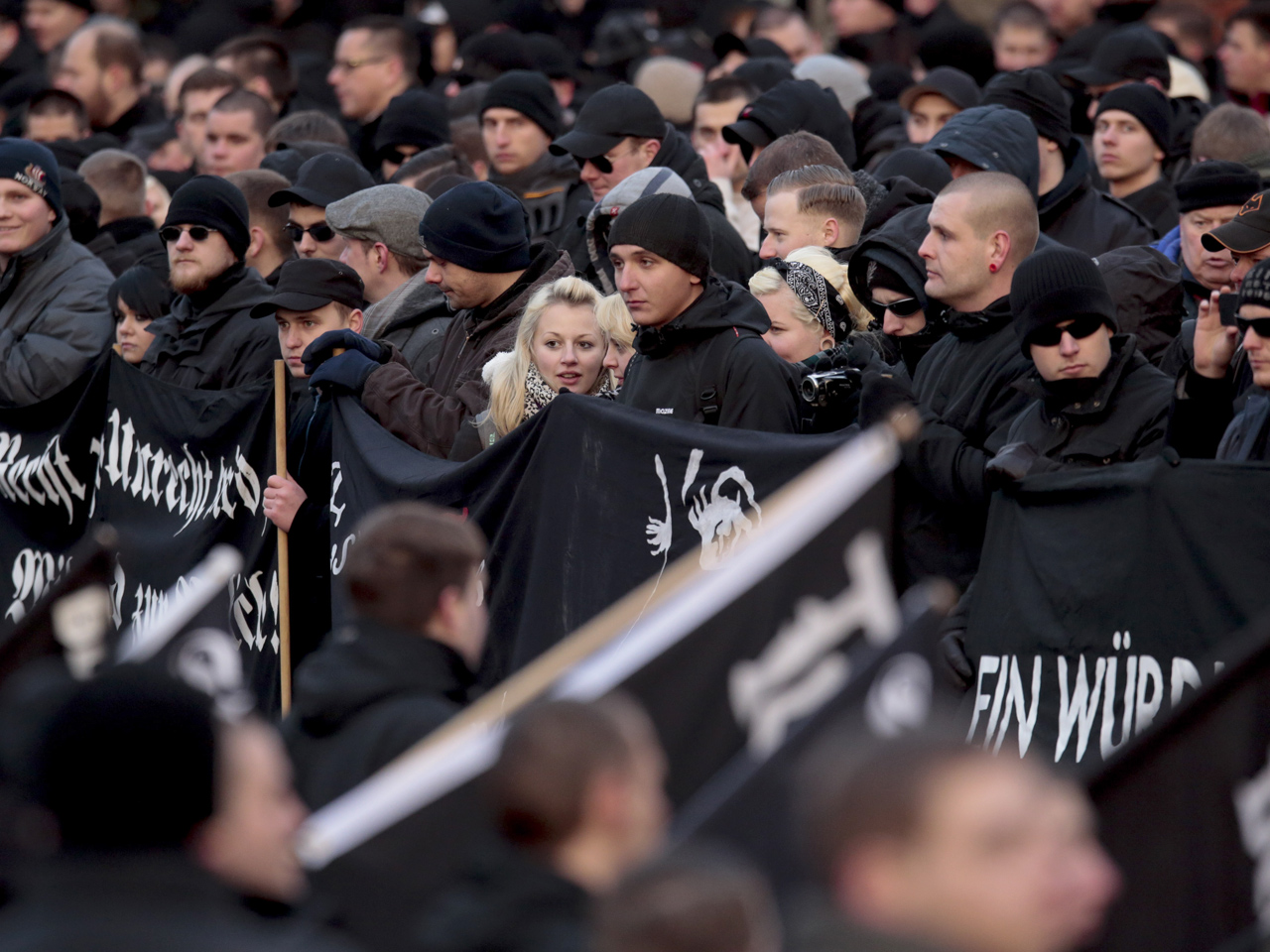 (New York, N.Y.) — The Counter Extremism Project (CEP) reports weekly on the methods used by extremists to exploit the Internet and social media platforms to recruit followers and incite violence. At the beginning of September, CEP researchers identified a fundraising campaign organized by white supremacist Christopher Pohlhaus on the fundraising platform GiveSendGo to construct a training and campground area in Maine. Separately, last week on Telegram, following several shootings in Memphis allegedly committed by an African American man who livestreamed part of the attack, neo-Nazi Telegram channels called for acts of violence in retaliation.

Also on Telegram, there were posts from the publisher of a neo-Nazi magazine announcing they made a donation to the Nordic Resistance Movement (NRM) following the earlier publication of an issue dedicated to the group. CEP had previously reported the magazine for violating content policy to both Amazon and Barnes & Noble where it is sold, however it was not removed.Additionally, on a dark web imageboard that endorses terrorism, an individual posted a link to plans for a homemade single shot handgun, and campaigns were found on both 4chan and a dark web imageboard in an attempt to spread a neo-Nazi terror manual originally released in July. A neo-Nazi website dedicated to the work of James Mason announced that they were severing ties with the group National Socialist Order (NSO) due to the NSO’s alleged takeover by the Satanic occult group Order of Nine Angles (O9A).

On Facebook, CEP found multiple accounts that posted a variety of ISIS propaganda. Finally, there were eight documents discovered on the Internet Archive useful for committing acts of terrorism, including instructions for making bombs and explosives, six of which were published by the pro-ISIS online group al-Saqri Foundation.

On September 1, CEP researchers located a campaign on the website GiveSendGo, organized by Christopher Pohlhaus, aka “Hammer,” attempting to raise money for a “campground” and area in which to “train” in Maine. Pohlhaus has previously stated his intention to create a white-only space in Maine, stating that he and his followers are “white nationalist preppers.” In a message on Telegram on September 6, Pohlhaus stated that he had hosted a “racist family campout” on his land.

“This fundraiser is a violation of GiveSendGo’s Terms and Conditions, which prohibit using the site to fundraise ‘to promote…discrimination or hatred against individuals or groups based on race, ethnic origin, (or) religion,” said CEP researcher Joshua Fisher-Birch. “This individual has participated in multiple white supremacist propaganda campaigns, maintains relations with neo-Nazi organizations, has celebrated violent white supremacist attacks, and has stated his intentions to establish himself in the state of Maine. GiveSendGo should remove the page promptly and stop the flow of money into the hands of extremists who will use the funding to further their hateful rhetoric.”

The campaign had raised $145 from three donors within approximately 24 hours. CEP reported the fundraising campaign to GiveSendGo for violating their Terms and Conditions on September 1 and then followed up with additional pertinent information on September 7. Despite CEP reporting it, the fundraiser was still accessible on September 12.

On September 8 and 9, accelerationist neo-Nazi Telegram channels encouraged acts of violence in response to a shooting spree in Memphis allegedly committed by an African American man who livestreamed part of his rampage on Facebook Live. Several white supremacist Telegram channels falsely claimed that the alleged gunman was specifically targeting white people. Multiple Telegram channels encouraged acts of violence against the African American community in response, with several channels posting a meme glorifying Dylann Roof, claiming that a race war had started. Other channels posted sections from the alleged gunman’s livestream in an effort to create a backlash. Neo-Nazi accelerationists frequently look for events that they can claim need to be avenged with violence.

CEP located a post on a dark web imageboard that endorses terrorism on September 7, linking to plans for a homemade handgun. The weapon can be made with a hacksaw, metal components, or a welding kit and fires a single .22 rimfire round. The plans are only available for sale to U.S. citizens because of International Traffic in Arms Regulations. The site that posted the plans suggested that an individual could turn in the pistol at gun buyback events. The post on the imageboard was originally made on September 2. The imageboard advocates for acts of white supremacist violence and has previously shared information regarding kits for the homemade construction of firearms, most recently on July 24.

Neo-Nazi Website and The Base Announce Breaking of Ties with National Socialist Order, New Successor Group Announced on September 12

On September 7, a neo-Nazi website dedicated to the work of James Mason announced that they were severing ties with the group National Socialist Order (NSO) due to the latter’s alleged takeover by the Satanic occult group Order of Nine Angles (O9A). The website, which previously posted communiques and propaganda from NSO and some of its members, stated that O9A’s support of sexual violence against children and Satanism was not in line with the website’s neo-Nazi beliefs and that NSO was allegedly essentially finished as an organization. Two individuals were removed from the “staff” section of the website, and one of the former NSO leaders, who disavowed and allegedly left the group in light of O9A influence, removed the NSO designation from his username. The website reaffirmed its commitment to neo-Nazism and lamented that a “once-growing” organization had been ruined.

Former NSO members released a blog post on the website on September 12, claiming to start a new organization, the “National Socialist Resistance Front.” The new group proclaimed their goals included the “elimination” of all non-whites and the belief that white men should control the world.A Telegram channel affiliated with The Base also denounced the NSO due to the alleged O9A takeover. The channel claimed that The Base would not allow O9A adherents into their ranks.

CEP located a post on Telegram initially made on September 2 from the publisher of a neo-Nazi magazine announcing that they had donated 1,000 U.S. dollars to the Nordic Resistance Movement (NRM). The special edition of the magazine, released on April 20, contained articles about NRM, including a piece by the head of the group’s Swedish branch, Simon Lindberg. The magazine was sold on Amazon, Barnes & Noble, and several other online locations.

On May 10, CEP reported the magazine to both online stores for violating Amazon’s Content Guideline for Books which forbids the sale of content used to “promote intolerance based on race, religion, and sexual orientation,” and to Barnes & Noble for violating their Content Policy prohibiting the sale of material that “encourages intolerance, terrorism, hate, racism or violence.” Neither store removed the periodical, and it was still online on September 8.

On August 29, 4chan’s /pol board users suggested launching a new antisemitic trolling campaign. The thread advocated putting up stickers and flyers that said “Jews” without additional context to provoke a backlash, modeled on the white supremacist trolling campaign “It’s Okay to Be White.” The campaign is also designed to give the perpetrator plausible deniability if caught. The 4chan post received 324 replies within two days. Of the first 50 comments, 46 were positive towards the campaign, two were negative, and two were neutral or off-topic. Comments included threats of antisemitic violence and the use of antisemitic and racial slurs. Neo-Nazi Terrorist Manual Advertised on 4chan and Dark Web Imageboard, Located on the Internet Archive and UFile.Io

On August 30, CEP researchers located a campaign on 4chan and a dark web imageboard that advertised an accelerationist neo-Nazi manual that advocates for acts of terrorism. CEP also found the manual on the Internet Archive and Ufile.Io.The book, originally released on July 14, encouraged acts of terrorism, including mass shootings and attacks on targets including religious institutions, LGBTQ bars, places frequented by people of color, and the destruction of infrastructure to cause a breakdown of order. Written by between 25 and 100 authors, the book encouraged attacks against law enforcement, politicians, African Americans, Jews, Muslims, Sikhs, Latinos, and LGBTQ people.

The thread on 4chan advertising the manual contained several pages taken from the book and had 227 overall comments. Of the first 50 comments, 26 were positive, 17 were negative, and seven were neutral or off-topic. Comments included the promotion of violence against Jews, as well as some commenters suggesting that law enforcement or intelligence agencies created the manual for the purpose of entrapment.The Internet Archive removed the file quickly after CEP reported it. The cloud storage site Ufile.Io did not remove the manual after CEP reported it, despite the content violating the site’s Terms preventing the upload of content that is “abusive, harassing, threatening, unlawful or promotes or encourages illegal activity.”

In a sample of pro-ISIS content on Facebook located on September 7, CEP found ten Facebook accounts that posted a variety of full ISIS propaganda videos, segments taken from videos, Amaq footage, pages taken from ISIS’s Rumiyah magazine and the weekly al-Naba news publication, and photo propaganda. Five of the ten accounts had between 1 and 1,860 friends or followers, with an average of 728. Five accounts had an unlisted number of friends or followers.

CEP located two full-length ISIS videos. The first, “Makers of Epic Battles 6,” from ISIS’s self-proclaimed West Africa province, was originally released on April 6, 2022, and uploaded to Facebook the same day. Approximately five months later, the video had 649 views and was shared 94 times. Facebook removed the video approximately five minutes after CEP reported it. The second video from ISIS’s self-proclaimed India state, “Jihad of the Believers Continues #8,” was released on March 25, 2022, and uploaded to Facebook on July 29. The video had 92 views on September 7. CEP reported the video to Facebook on September 7, but it was still online approximately five days later.

One of the Facebook accounts uploaded a photo of a young child estimated to be between the ages of four and eight, taken from a notorious ISIS video released on January 8, 2017. The video shows the child committing an execution of a civilian with a handgun. While the photo, which was uploaded to Facebook on April 1, did not show explicit violence, the photo was taken from a particularly disturbing ISIS execution video.It is unclear why Facebook’s hashing system or artificial intelligence did not detect the various ISIS videos or photos.CEP reported all 10 accounts to Facebook on September 7. All were still online five days later. The two videos were reported separately. One was removed within 48 hours.
Bomb Making Guides, Other Content Useful for Acts of Terrorism Located on the Internet Archive

CEP found eight documents on the Internet Archive useful for committing acts of terrorism, including instructions for making bombs and explosives. The same account uploaded all eight documents in November 2019. Six of the documents were published by the pro-ISIS online group al-Saqri Foundation, which publishes guides to aid individuals in committing terrorist acts. The six al-Saqri uploads included:

Instructions for making a suicide explosive belt.
A how-to guide on the synthesis of the toxic gas phosphine.
The homemade manufacture of a suppressor for a pistol.
Employing stealth and disguises for reconnaissance and evasion.
The use of chemicals to commit arson.
Instructions for firing a rifle while concealed in the trunk of a car.
The six documents had between 148 and 682 views, with an average of 240.

CEP additionally found two other explosives manuals on the Internet Archive. The first, billed as a “Military Chemistry Book,” contained instructions for making multiple explosive compounds, including acetone peroxide and lead azide, and general advice on using explosives. The book had 136 views. The final document, instructions for synthesis of the explosive HMTD, had 246 views.CEP reported the content to the Internet Archive, who removed six of the eight files. The two pieces of content that remained on the site three days after they were reported were the guide on stealth and disguises and the “Military Chemistry Book.”