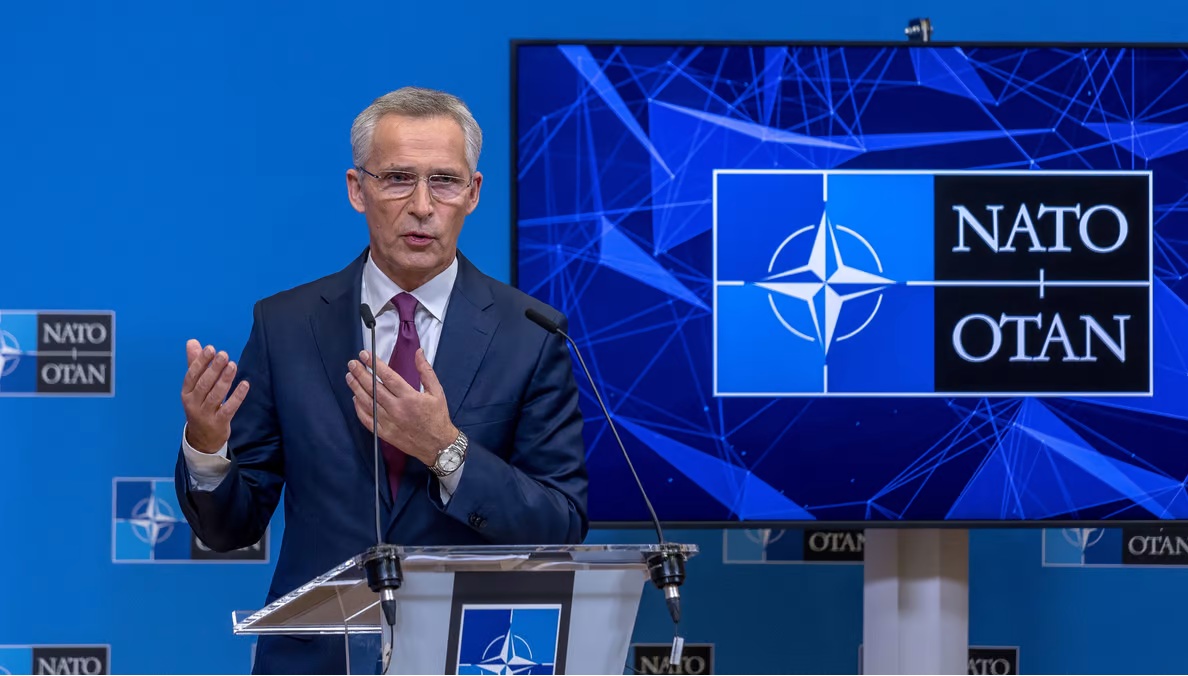 DW- Visiting Berlin, NATO’s Jens Stoltenberg has praised defense spending increases he described as “historic” but also called on Germany to keep pushing to reform and upgrade its rather sclerotic military, the Bundeswehr.NATO Secretary-General Jens Stoltenberg was the keynote speaker at the Berlin Security Conference on Thursday, using his address to praise Germany for its “strong support for Ukraine” and also its planned military reforms and increases in defense spending.

“I welcome Germany’s strong support for Ukraine, with significant financial, humanitarian and military aid, including advanced air defense systems and training for Ukrainian soldiers. We see the difference this makes every day on the battlefield,” Stoltenberg said. He also acknowledged that this support “comes with a price,” saying that rising costs of living and food and energy prices were making life difficult for billions around the world.”But the price we pay is in money, while the price the Ukrainians pay is in blood,” Stoltenberg said. “If authoritarian regimes see that force is rewarded, we will all pay a much higher price and the world will become a more dangerous world for all of us.”

Stoltenberg also praised Germany’s decision, soon after Russia invaded Ukraine this year, to dramatically increase defense spending and to start new procurement and modernization drives within its military, the Bundeswehr. He described the spending increases as “historic,” and said Germany’s government was right to describe the change of policy as a Zeitenwende, which loosely translated means a turning point or an epochal change.

NATO and some members like the United States had for many years lobbied Germany to invest more money in its military, often naming the NATO target of spending 2% of GPD on defense. Still, it was a difficult sell for a country that had come to define itself as noninterventionist and a purely defensive force in the aftermath of World War II.Successive German governments had internationally indicated a willingness to at least try but had made very little progress at securing any real change in a difficult domestic political landscape.Only after Russia’s invasion of Ukraine did Scholz’s new coalition government set the matter in stone. Prior to the war, during difficult coalition negotiations after Germany’s elections last September, Scholz had only said that he wanted to increase defense spending to the extent that the budgetary situation would allow.

In a development unlikely to please Scholz’s government, Thursday’s meeting came amid media reports in German, seemingly originating from whistleblowers in the defense circles, suggesting that the Bundeswehr would only have sufficient ammunition for two days of intense fighting. NATO requires members to have 30 days’ worth of ammo in reserve.

The government has neither confirmed nor denied the specific details of the report about having two days of ammunition in reserve, citing national security concerns, but has acknowledged that there is a problem.As Defense Minister Christine Lambrecht sought to quench the fires, Stoltenberg did not directly allude to the reports or to the Bundeswehr’s more longstanding procurement and combat readiness problems, but he did tell the Berlin audience that NATO and the world needed the Bundeswehr.”We need a strong and a ready Bundeswehr,” said Stoltenberg, who also stressed the importance of the defense industry in Germany. “This matters for Germany’s security, it matters for Europe’s security, and it matters for global security.”Scholz was asked about the reports during his joint press conference with Stoltenberg.

“In the last decades, we have created dead-end solutions when it comes to the supply of ammunition for the Bundeswehr,” Scholz said. He said it was becoming apparent to the government “how important it is to be able to guarantee a permanent chain of resupply, not just because of the war in Ukraine, but also because of keeping an eye on our own numbers.”Scholz said the Defense Ministry was “very busily” looking to “clear up these mistakes of the past decades.” He said it was not an easy operation but that the ministry was doing everything to ensure success, “and it will succeed, too.”

Scholz was also asked if Germany’s plans had changed regarding its offer of a Patriot air defense system for Poland. Germany offered the equipment earlier this month, soon after a Ukrainian air defense rocket fire hit Polish territory near the border to Ukraine, killing two people.Poland subsequently responded by saying it thought the equipment should go to Ukraine instead, which was not the first time Warsaw has sought to instruct Berlin on how to distribute military assistance since the war broke out. “Our offer to Poland stands unchanged. We are ready to strengthen Poland’s security by stationing the Patriots there,” Scholz said. Ukraine has also appealed for German Patriot air defense systems in the past, but it is not among the systems so far sent by Germany.