EU# citizen in UK# should not stay in the UK 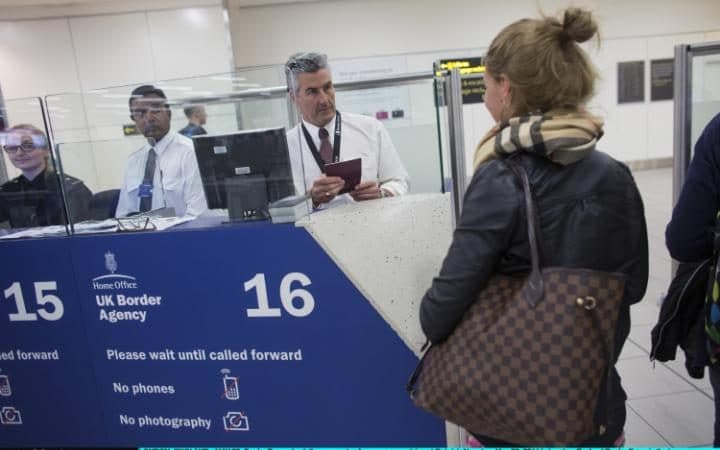 EU migrants who arrive after triggering of Article 50 should not stay permanently, says report
Peter Dominiczak, Political Editor
Any EU citizen travelling to the UK after Theresa May triggers Article 50 should not be allowed to permanently stay in the UK after Brexit, a major inquiry concludes today.
Amid growing fears of a “surge” of EU migrants travelling to the UK to take advantage of an expected amnesty, a major report by British Future calls for a “cut-off date” to ensure people coming to the UK do not simply “expect to stay after Brexit”.
The inquiry, which includes both Remain and Leave MPs, calls for the three million EU migrants already here to be given an amnesty and offered permanent residence with the same health, social and educational rights as British citizens.
Theresa May has so far refused to guarantee the rights of EU citizens already living in the UK, insisting that she will not do so until she has agreement from European leaders that they will do the same for British ex-pats.
Around 1.2 million British nationals live in other EU countries.
The report found that setting the date that Article 50 is triggered as the cut-off point would be fair and legally watertight, but would not lead to a surge in migration from across the bloc and European Economic Area nations.
Gisela Stuart, a Leave campaigner and Labour MP who chaired the inquiry, said: “We determined that the triggering of Article 50 should be the cut-off date, after which EU citizens moving to the UK would not be entitled to stay permanently after Brexit. This would limit any ‘pull factor’ for EU citizens not already in the UK.
“Britain should make clear at the start of the Brexit negotiations that EU citizens already here before that date can stay. This would send a clear signal about the kind of country the UK will be after Brexit and the relationship we want with Europe.
“We should expect reciprocal deals for Britons living in European countries, but Britain should make the first move to demonstrate goodwill.”
Just 3 per cent of European citizens living in Britain are unemployed, with 51 per cent classed as employees, 9 per cent self-employed, 4 per cent students and 7 per cent retired, while 17 per cent are children, according to the report.
More than a quarter of the food and drink manufacturing workforce and about 15 per cent of academics are from other EU countries, it added.
The panel called for the permanent residence system, which is underpinned by EU law, to be converted into the indefinite leave to remain status available to international migrants living in the UK.
But the complex and expensive process should be streamlined and costs capped, it said.
Seamus Nevin, head of employment and skills policy at the Institute of Directors, said: “Businesses throughout the UK are very clear that confirming the status of EU migrants resident here is the right thing to do.
“The evidence the inquiry received showed that uncertainty from valued employees about what will happen to them is tangible in workplaces across the UK. Our members can’t plan for the future or give their employees the assurances they need until government sets out its plan.
“Ending this worry and uncertainty, both swiftly and fairly, is not only the humane thing to do. It is also essential to avoid major disruptions to workforce planning and business development if British companies are to be able to prepare to succeed in life outside the EU.”