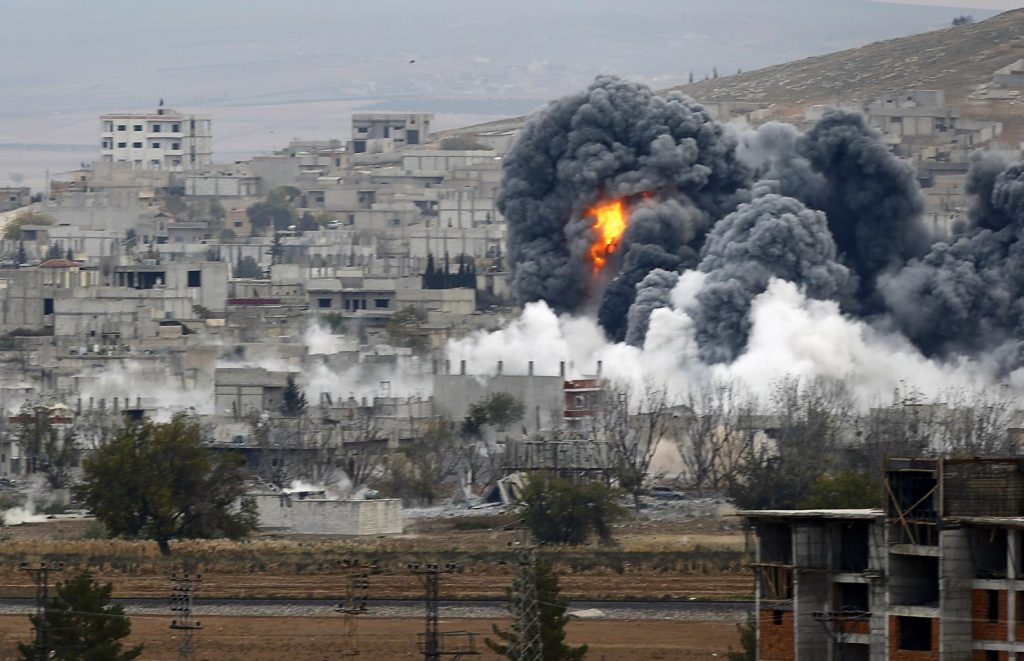 The Dangers of Military Mission Creep in Syria

Washington must leave Damascus before it searches for new monsters to destroy and other reasons to stay.

President Donald Trump was never especially enthralled with the notion of keeping several thousand U.S. troops in Eastern Syria over the long-term. Last April, he suggested to a roomful of his supporters that the United States would be withdrawing from the country “very soon,” a public declaration that blindsided the national-security bureaucracy and caused painful heartburn in the bowels of the Pentagon. After days of speculation, Trump agreed to provide his generals with a little more time to wrap up the campaign against the Islamic State. The president didn’t necessarily want to make that decision, but he has found it difficult not to defer to the military professionals with three or four stars on their lapels.

Eight months later, Trump has lost his patience. He wants American ground forces out of Syria immediately, tweeting as much on the morning of December 19. Pentagon officials are once again running around with their hair on fire, seemingly oblivious to Trump’s new directive. According to the New York Times, Defense Secretary Jim Mattis and senior national-security officials have been trying to dissuade the White House from pulling U.S. forces out of Syria on such a fast timetable. Doing so, they argue, would hand Syria to Iran and Russia on a silver platter and subject Washington’s Kurdish allies to near-certain slaughter from a Turkish government itching to launch an operation east of the Euphrates River. Sen. Lindsey Graham, the uber-hawk who has grown close to Trump on a personal level, is using the president’s favorite social-media forum to shame the administration into reversing its decision.

One can only hope Trump sticks to his guns, walls off the Monday-morning quarterbacking, and actually carries out his decision. What the president is doing is saving the United States from a classic case of mission-creep, where instead of withdrawing when the job is done, Washington searches for new monsters to destroy in order to justify its continued presence.

It’s important to remember why U.S. military forces are in Syria to begin with. In September 2014, President Barack Obama took to the podium during a prime-time address and explained to the American people that the bloodthirsty brutes of ISIS needed to be rolled back and vanquished. Washington would leverage its overwhelming airpower and pound ISIS from the sky. Meanwhile, on the ground, local, anti-ISIS units would simultaneously recapture the organization’s territory, deprive the Islamic State from its sources of revenue, and eliminate its leadership.

The speech, coming a few months after several Americans were beheaded in the barren Syrian desert, outlined the kind of clear and concise mission Americans could get behind. This wouldn’t be about nation-building, resolving a seemingly unsolvable Syrian civil war, or reconstructing the Syrian economy from the ground-up, but rather about killing terrorists and exacting revenge on a group that at that time ruled a swath of Iraq and Syria the size of the United Kingdom.

Four years later, the objectives have changed to a near unrecognizable level. The roughly two thousand U.S. troops are not only terrorist hunters, but anti-Iranian bulwarks, Kurdish defenders, and peacekeepers. U.S. advisers have been used as pawns in the violent chess match that is Syria, ordered to do everything from patrols in the northern Syrian city of Manbij in order to keep the Turks and the Kurds separated to serving as placeholders along the Iraqi-Syrian border—presumably to keep the area free of Iranian influence.

Just last month, the Pentagon announced that U.S.-manned observation posts would be established on the northeastern Syrian-Turkish border. While Secretary Mattis described the posts as a standard-fare intelligence operation designed to better inform Turkey of terrorist movement, the real mission was about preventing the Turks and Syrian Kurdish militias from shooting at each other and starting a whole, new war. One could only assume that President Trump, who is constantly on guard to overseas adventures of dubious import, was becoming increasingly uncomfortable with the notion of the U.S. military being rented out in such a way. The president’s eagerness to pull the plug on any U.S. ground presence whatsoever is as strong an indication as any that he is tired of the Syria portfolio.

In the hours, days, and weeks ahead, the White House will be subjected to a litany of dire warnings from opponents of a U.S. withdrawal. Columnists like Max Boot of the Washington Post , Bret Stephens of the New York Times , Bill Kristol of the now-defunct Weekly Standard , and arm-chair generals in Congress will regurgitate the same old talking points the American people have heard for years. Some of them will claim that America’s credibility will be squandered as a result of a withdrawal, an argument people tend to use when they don’t have a better one.

Lawmakers like Rep. Adam Kinzinger, Sen. Jim Inhofe, and Sen. Lindsey Graham will exploit Trump’s antipathy towards Iran to paint the picture of a newly ascendant Persian Empire swallowing up Syria as a new province (the fact that Iran and Syria’s Assad regime have had a strategic alliance with one another for the previous four decades somehow gets lost in the conversation). The Wall Street Journal editorial board will use the Russia card, writing that the only winner of a precipitous U.S. drawdown would be Vladimir Putin (assuming, of course, that Putin wants an angry, bankrupt, and dysfunctional Arab country on his plate for the remainder of his presidency).

All of these attempts at obfuscation, however, are meant to pull the wool over the American people’s eyes. The blunt reality is that, on this specific question, President Donald Trump is doing the right thing. If there was any U.S. national-security interest in Syria to begin with, it was to eradicate ISIS to the point where it no longer presented a direct threat to the homeland. Everything else—forcing Iran to leave; playing peacekeeper between the Turks and the Kurds; pressuring Bashar al-Assad to negotiate his own surrender—are distractions well beyond the original American mission.

Daniel R. DePetris is a columnist at the Washington Examiner and the American Conservative.