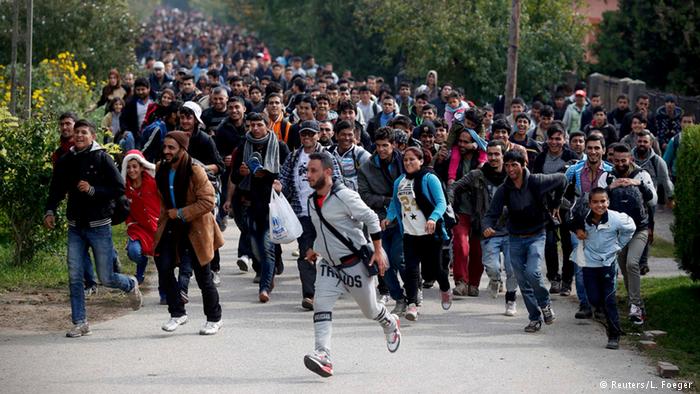 The Bundestag is discussing new laws for refugees that will facilitate swifter deportation. But one proposal – setting up transit zones at the border – goes too far for the Social Democrats.

The head of the Social Democrats and Germany’s deputy chancellor, Sigmar Gabriel, rejected the proposal of setting up transit zones for refugees coming from across the border to Germany.
These proposed zones have been conceived to filter out travelers without papers or fake documents or migrants from “safe” countries who did not have any claim to asylum in Germany. Chancellor Angela Merkel’s party, the Christian Democratic Union (CDU) and its Bavarian ally, the Christian Social Union (CSU), have supported the plan, saying it will help in differentiating between migrants in desperate need of help and those who can be sent back to their home countries.
According to Gabriel, the transit centers would require Germany to keep new arrivals – estimated at 6-7,000 daily – in custody for 48 hours. “I do not think this would be legally possible, and it would also lead to a situation which we would not like to have in Germany,” Gabriel said on Wednesday.
However, the leader acknowledged the need to differentiate between refugees who had a better chance of staying, and those who needed to be sent back as soon as possible.
There was also a need to improve measures to deport rejected asylum seekers sooner and to boost state police forces so they may better cope with the situation, Gabriel stressed.
Important points in asylum debate
Proposals expected to be approved in the Bundestag, the lower house of the German parliament, at a vote on Thursday include classifying Albania, Kosovo and Montenegro as “safe countries of origin” so that officials will be able to deport migrants coming from these countries sooner. Migrants from these countries will be kept in reception centers until they are sent back.
Asylum seekers’ maximum permitted stay in reception centers will be increased to six months instead of three, while those waiting will receive non-cash benefits as far as possible. Cash allowances will be paid only a month in advance.
Migrants with slim prospects of gaining asylum will receive only limited benefits, while migrants with permission for staying longer will have access to German language speaking courses. Asylum seekers could also get a health card that will guarantee them access to a doctor, depending on the state they are registered in. Refugees qualified as doctors would also be able to help in shelters, once German politicians agree to the new rules.
More than 800,000 refugees are expected to arrive in Germany this year. The new rules are aimed at making bureaucracy easier and more transparent for local administrations struggling to cope.
mg/msh (dpa, Reuters)