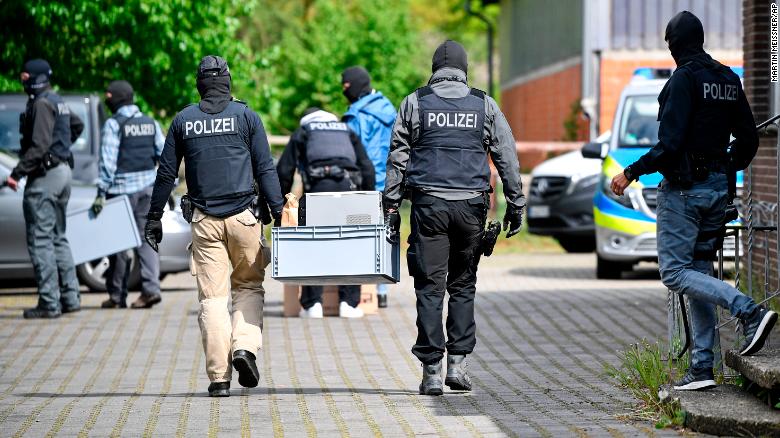 (CNN)Germany announced Thursday it has designated the Lebanese militant and political group Hezbollah a terror organization, banning all of its activities in the country and ordering raids on sites police say are linked to the group.

Police told CNN a number of properties in Berlin, Bremen and North Rhine-Westphalia were searched early on Thursday. According to the police and the German Interior Ministry, four mosques and cultural associations were raided, as well as private homes of their board members, treasurers and tax advisers.Police investigate the Hezbollah-linked Imam Mahdi center in Muenster, western Germany, on Thursday.

“The associations under investigation are suspected of forming part of Hezbollah due to their financial support and propaganda for the terrorist organization,” the Interior Ministry said in a statement posted on its website. It added the searches were conducted to “ensure that evidence of potential sub-organizations in Germany could not be destroyed when this ban was announced.”The move to ban Hezbollah’s activities in Germany comes after a sustained campaign by the United States and Israel. Last December, the German parliament approved a motion. It has argued for Chancellor Angela Merkel’s government to ban the group’s activities in Germany.

“As the authority responsible for issuing the ban, the Federal Ministry of the Interior, Building and Community is of the opinion that Hezbollah openly calls for the violent elimination of the State of Israel and questions the right of the State of Israel to exist,” the ministry said in the statement.”The organization is therefore fundamentally against the concept of international understanding, regardless of whether it presents itself as a political, social or military structure,” it added.

The group is the dominating elected political and military force in Lebanon. It grew out of an Israeli occupation during Lebanon’s civil war and has been strongly backed by Iran financially and militarily.The US and Israel have praised the decision that puts Germany at odds with the European Union, which in 2013 designated Hezbollah’s military wing but not its political arm. The Iranian-backed Lebanese Shiite group is a strong force in Lebanese politics, which is the reason why some European countries are reluctant to ban the group in its entirety.The UK put the group as a whole on its terror blacklist in March 2019. The US, Canada, the Netherlands, Israel, the Gulf Cooperation Council and Bahrain also designates the group in its entirety as a terrorist organization.

“We applaud the German government’s actions today against suspected Hizballah supporters. The government’s decision to act reflects the resolve of the West to confront the global threat posed by Hizballah,” the US Ambassador to Germany Richard Grenell said in a statement.

Israel’s Minister of Foreign Affairs Israel Katz called the ban “a valuable and significant step in the global fight against terrorism.””I call on additional European countries and the European Union to adopt this necessary policy and to recognize organization for what it is: Hezbollah — both its military and political wings — constitutes a terror organization, and that is how it must be treated,” Katz said in a statement.