Combating Right-Far Terrorism by Defining it 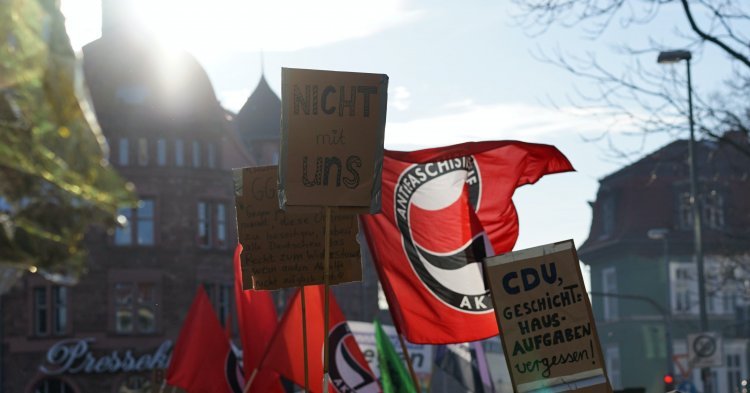 To solve a problem, we must first define it. As mantras go, it is indisputable and yet we find ourselves stumbling over terminology when trying to understand and define ‘far-right terrorism’ and the narratives that underpin it. If we can’t define it, how are we expected to prevent it ?

In response to threats that the iconic Whitehall statue of Winston Churchill may share the fate of Edward Colston, a large protest took to the streets of London. With echoes of the English Defence League (EDL) heyday of 2009-2012 the headlines wrote themselves, and the UK’s capital city braced itself for a day of “far-right riots”.

Some of the protestors were indeed linked to far-right groups like Britain First and some were fans of former EDL leader Stephen Yaxley-Lennon. The Democratic Football Lads Alliance (DFLA) were also present in large numbers, so a far-right contingent was certainly present. But here’s where it gets messy; I have previously written about the discussions taking place in a secret DFLA Facebook group which ranged from explicit threats of anti-Muslim violence to people openly condemning the racism and prejudice therein. They were however patriotic and proud to be English.

Which brings us to the army veterans who traveled to London; soldiers whose units fought in World War II, defeated a fascist dictator and who traveled to protect the statue of the Prime Minister that oversaw their victory. While there have been very real concerns about isolated incidents of infiltration of our armed forces, are we comfortable labeling all veterans ‘far-right rioters’?

If everyone is now ‘far-right’ then the phrase becomes meaningless. Grouping the populace into arbitrary tribes based on opposing political or social perspectives polarizes society and (inevitably) creates conflict between people identifying not as complex, multi-dimensional individuals but as singular, tribal identities. Extremism exists, but it is important to define the problem accurately otherwise we not only lose sight of the solutions, but we make the problem worse and with Right-Wing Terrorism (RWT) the fastest-growing threat in the UK, we simply cannot afford for that to happen.

Based on a recent history of far-right radicalization cases, there are clearer definitions for the far-right threat we face, and these can be broken down into three distinct strands: Cultural Nationalists, White Nationalists, and White Supremacists.

Cultural Nationalists believe that “Western Culture” is under threat from mass migration into Europe and from a lack of integration by particular ethnic groups. This ideology tends to focus on the rejection of cultural practices, such as wearing the burka (or niqab), so it is unsurprising that this has been most closely associated with anti-Islam groups. Darren Osborne took this worldview to its most deadly conclusion in his terrorist attack against Muslim worshippers in Finsbury Park. He subscribed to the most prevalent narratives underpinning cultural nationalism: anti-Islam, anti-Government, and anti-immigration.

Building on these narratives, White Nationalists go further and incorporate a significance on ‘whiteness’ or ‘white race’. Sometimes referred to as ethno-nationalists, they believe that mass migration from the ‘non-white’ world is an existential threat and advocate for a ‘white’ homeland, either through the partition of existing countries or by repatriation of ethnic minorities, by force if necessary. Groups such as Generation Identity or the now-defunct Identitarian Movement UK peddle this conspiracy and frame it as The Great Replacement, a chilling trope for ‘white genocide’, which became the title of the manifesto penned by Brenton Tarrant before he murdered 51 Muslim worshippers in Christchurch, New Zealand.

White Supremacism (neo-Nazism) has historically been most likely to present a risk of terrorism because it explicitly glorifies violence as a means to an end, either by attacks on minority communities or ultimately through a Race War. It believes that the ‘White Race’ has certain physical and mental characteristics that are indisputable and make it superior to all others. The UK’s most high-profile neo-Nazi group of recent years is the banned organization National Action. Anti-Semitism is most dominant in this brand of extremism, followed closely by the now-familiar narratives of anti-immigration, anti-Islam, anti-Government, and of course the importance of the ‘white race’. While conspiracy theories feature prominently across all three ideological strands, conspiracies about non-white races and the decline of the West are central to white supremacism.

A right-wing extremist will scapegoat and vilify minority groups and legitimize violence through these six core narratives: anti-Semitism, anti-Islam, anti-immigration, anti-government, placing importance on ‘whiteness’ and justifying such views with an over-reliance on conspiracy theories. And in America particularly, there is the anti-Black sentiment. A right-wing terrorist will engage in violence motivated by these ideological positions.

Across all these narratives a recurring theme is ‘degeneracy’ – the idea that the West has lost its way and is suffering a moral collapse in which the foundations of Western culture, usually framed as religion, pride in your country and ‘race’, and the concept of family are being undermined. However, in these febrile and polarizing times, where your politics is often used to define you as a ‘good’ or ‘bad’ person, it’s as important as it is trite to stress that simply holding far-right views does not make you a terrorist. ‘Far-right’ is a legitimate political position that many will agree with, and equally many will not, and your politics are your own business, but legitimizing violence in pursuit of a political position or ideology will draw the attention of counter-terrorism police.

As distinct as the three strands of Cultural Nationalism, White Nationalism and White Supremacism appear, the process of radicalization defies such simplistic classification. Increasingly we are seeing people create ‘pick n mix’ identities from these narratives, dependent on their own personal experiences and grievances. This makes the concept of far-right ‘groups’, or that people are affiliating to the categories we create, less relevant and understanding a person’s individual motivations and grievances far more pertinent.

While it is undoubtedly useful for policymakers and practitioners to define and understand the ideological themes at play within radicalization, to bring about meaningful change in an individual we must understand which narratives they subscribe to and address why these have become fused to their identities.

There are two paths we can take; we can demonize, or we can empathize. It is near impossible to hate or hurt someone you empathize with, so we must treat all people with respect and listen to those we disagree with to understand their perspective. Only then can we help them unravel the ideological chaos they find themselves in. Neither our media, nor especially social media, are built to reward empathy, but without it, there can only be conflict. We can define the threat and we know how to prevent it, but are we on the right path?