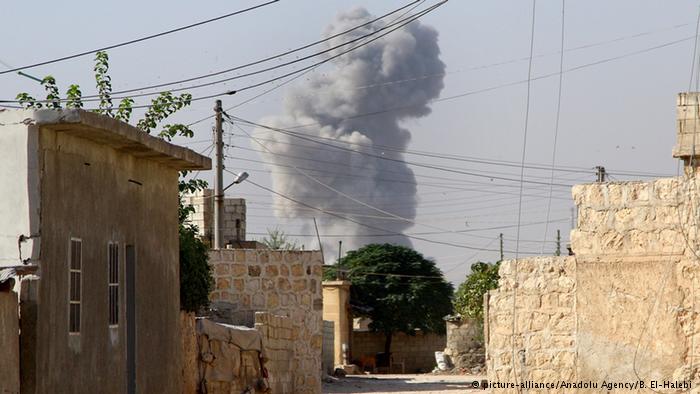 Ground offensives led by the Syrian army and their allies have continued into the start of the week. Three rebel groups affiliated with the “Free Syrian Army” (FSA) reportedly

received munitions from the US.
Syrian government troops and their allies pushed on with their offensive a few kilometers south of the northern city of Aleppo on Monday, after recapturing several villages from rebels.
The UK-based Syrian Observatory for Human Rights also said that the Syrian army was attempting to advance east of Aleppo toward Kweires military airport, in a bid to break a siege of the air base by “Islamic State” (IS).
Russia’s air force continued its support of Syrian ground efforts on Monday, with state news agency RIA Novosti reporting that Russian warplanes had hit 49 targets in the provinces of Aleppo, Damascus, Idlib, Latakia and Hama since Sunday – destroying command posts, bunkers and artillery.
Russia’s air force said it had conducted almost 700 airstrikes in Syria since beginning its bombing campaign against Syrian rebels on September 30.
Rebels receive more weapons
As the Syrian government and their allies pushed on with their offensives on Monday, several rebel groups said they had received new US-made weapons from their Western allies.
“We received more supplies of ammunition in greater quantities than before, including mortar bombs, rocket launchers and anti-tank [missiles],” said Issa al-Turkmani, a commander in the FSA-affiliated “Sultan Murad.”
“We have received more new TOWs in the last few days … We are well-stocked after these deliveries,” he added. “TOWs” is a reference to “Tube-launched, Optically-tracked, Wire-guided” anti-tank missiles.
An official from another Aleppo-based rebel group said the supplies were inadequate for the scale of the assault, however. The delivery of TOW missiles to a number of vetted rebel groups is part of a program supported by the US, which has also seen some military training by the Central Intelligence Agency (CIA).
Half of Syrian population displaced
US Secretary of State John Kerry said on Monday that the US aims to avoid the “total destruction” of Syria.
Speaking during a visit to Madrid in Spain on Monday, Kerry said he planned to meet with Russian, Saudi and Turkish leaders in coming days to work through “options that could perhaps reignite the political process and bring about a political transition in Syria.”
According to estimates by the United Nations (UN), some 12 million Syrians have now fled the country or been internally displaced by the conflict. A further quarter of a million have been killed. Prior to the conflict between the Syrian government and rebel forces, which began in 2011, the population stood at 22.4 million.
ksb/msh (Reuters, AP, AFP, dpa)