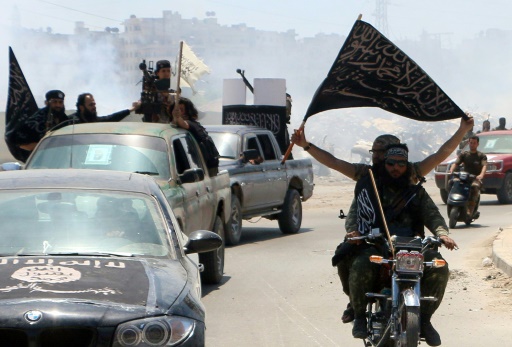 Free Syrian Army (FSA) rebels have rebuffed cooperation with Russia against the “Islamic State” and holding elections. Their

response came after Russia suggested it could work with the rebels.
The Western- and Gulf-backed rebel opposition said Russia should stop bombing them and end its support for Syrian President Bashar al-Assad before suggesting any sort of cooperation.
“Russia is bombing the Free Syrian Army and now it wants to cooperate with us, while it remains committed to Assad? We don’t understand Russia at all,” said Lieutenant Colonel Ahmad Saoud, a spokesman for Division 13, an FSA rebel group.
In an apparent policy switch, Russian Foreign Minister Sergei Lavrov on Saturday told Russian television that the Russia Air Force, which has been hitting targets in Syria since September 30, could support the “patriotic opposition, including the so-called Free Syrian Army, from the air.”
He added the United States should provide the location and contact of groups fighting the “Islamic State” and terrorism.
But the FSA rebels, a lose umbrella of anti-regime forces that have formed alliances with more radical and powerful Islamist groups to fight both “IS” and Assad, accuse Russia of primarily targeting rebels instead of IS.
They accuse Russia of only bolstering government forces backed up by Lebanese Hezbollah fighters, Iranian troops and the Iraqi Shiite militia.
“Instead of talking about their willingness to support the Free Syrian Army, they should stop bombing it,” said Samir Nashar, a member of the Syrian National Coalition, the opposition’s main political body.
“Russia must firstly stop bombing the headquarters of the Free Army before offering air support that we haven’t asked for,” said Fares Bayoush, the head of the FSA-affiliated group Fursan al-Haq.
Elections
Lavrov also mentioned the possibility of holding elections and reaching a political solution with all Syrians at the negotiating table, but the rebels’ comments underline how difficult it will be for multiple competing foreign powers, dozens of rebels groups, and the regime to reach any political solution.
Nasar said Russia was only trying “to circumvent the demands of the Syrian people for Assad’s departure” by suggesting elections and insisting Assad remain in power during a political transition.
“The Russians are ignoring the real facts on the ground, with millions who have been displaced inside and outside Syria, where cities are destroyed every day,” Nasar said. “What elections are they talking about holding under such circumstances?”
Bayoush of Fursan al-Haq said Russia’s idea of holding elections “means they are asking for Assad to stay in an interim period.”
Another rebel leader, Bashar al-Zoubi, said Russia must force Assad to first step down. “Holding elections is illogical and unrealistic because the Syrian people is displaced, disappeared in prisons, or pursued by the regime,” he said.
Setting the stage?
The rebels and their Gulf and Turkish backers argue Assad must first step down to reach a political solution. Russia is concerned that if Assad steps down it could create a power vacuum and insists he should be part of a political transition and fight against IS.
The United States and some European states say Assad may be able to play a role in a political transition but must ultimately step down and are against any government role in defeating IS.
Lavrov’s interview was broadcast a day after he met with his Saudi, Turkish and US counterparts in an effort to give renewed energy to a political solution in the war-racked country.
On Saturday, he spoke with Egyptian and Iranian foreign ministers, as well as had another phone call with US Secretary of State John Kerry to discuss organizing talks to bring the Syrian government and opposition together. Next week the US, Turkey, Saudi and Russian foreign ministers are planning to meet again to advance a political solution, this time possibly with other key regional countries.
The flurry of diplomatic activity comes after a surprise visit by Assad to Moscow on Tuesday.
cw/bk (AFP, AP)