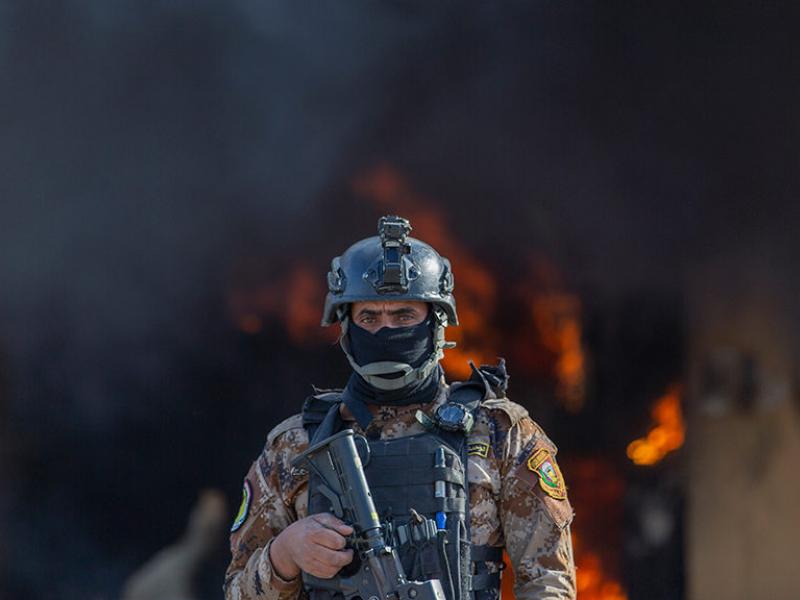 The Regrouping of ISIS in the Deserts of Syria

Washingtoninstitute– Relying on geostrategic advantages and the absence of substantial opposition, ISIS seeks to reconfigure itself in the Syrian and Iraqi deserts in order to expand its control.

on March 23, 2019, Syrian Democratic Forces (SDF) announced the end of ISIS’s control over their last stronghold in the northern and eastern parts of Syria following the liberation of the Baghuz area—located in the governorate of Deir al-Zour and on the Syrian-Iraqi border. Yet ISIS has since begun to reorganize itself in the central Syrian desert. Now, after two years, ISIS is seeking to reconfigure its security and military structures and increase its areas of control. Their presence in the desert has proven strategically beneficial to these efforts.

Although the exact number of ISIS members in the central and eastern Syrian deserts is unknown, there are an estimated 3,000 fighters in these two locales. While the region is economically devastated, the organization relies on numerous financial resources, most notably revenue from taxes and royalties imposed on local residents and merchants, spoils it seizes in ambushes against elements of the Syrian regime, and stockpiles of money and weapons from 2016-2017 when ISIS was at its peak.

The mountainous terrain and remote nature of the desert have allowed ISIS to regroup relatively undisturbed. Among the other forces on the ground is an absence of any real military will to combat ISIS in such a sparsely populated region. Some areas are completely devoid of military forces altogether, while in areas occupied by Syrian regime forces and their Russian and Iranian allies, these forces are focused on securing control of the main roads connecting several major cities, including Deir al-Zour, Homs, and Damascus. In contrast, fighting ISIS does not appear to be a priority for these forces in the foreseeable future.

Complex desert and mountain terrains also benefit ISIS training efforts, allowing the organization to conceal itself while establishing militant and extremist training camps. The location is also beneficial as it allows the organization to maintain foreign support lines both in Iraq and Turkey by activating logistical support sources from within Syria.

The geographical openness between the central Syrian and Iraqi deserts—stretching as far as the Hamrin Mountains and the Iraqi Makhmur regions—enables ISIS to easily activate smuggling networks, which provide logistical support to the organization in Syria. In addition, the composition of the broader network of armed groups in northwestern Syria allows ISIS’s leaders to move and manage the organization easily, as most these groups—ISIS included—share ideological similarities, since they emerged as splinter groups from Al-Qaeda.

To facilitate its return, ISIS is developing security jurisdictions that stem from the Syrian desert and spread in the form of security cells throughout the different regions of Syria, focusing especially on the rural areas of Deir al-Zour, Raqqa, and al-Suwayda. The organization aims to use these cells to strike local government leaders east of the Euphrates and spread terror among the Arab tribes there to ensure that they do not join the ranks of the SDF. Additionally, these cells help secure the organization’s smuggling networks, which relocate new members to the Syrian desert.

Given the Syrian desert’s sparse population, ISIS is setting its sights on re-establishing control over populated areas. In the medium term, ISIS may be focused on populations in the countryside of Idlib, Hama, and al-Suwayda in order to increase the organization’s numbers and resources.

Given the complex security, military, and political environment in Syria, it seems clear that the threat of ISIS will not disappear in the short and medium term. However, there are ways in which the international community and international coalition forces can contribute to preventing ISIS from staging a resurgence. Syria’s main actors are otherwise occupied with other priorities, leaving the SDF as the only entity qualified to continue the fight against the organization, even given their preoccupation with the Turkish-occupied areas in northern Syria.

It is necessary to continue to actively and intensively support the SDF and help reinforce its military capabilities. The international coalition should also seriously consider providing additional security and military support to help develop security structures in the SDF. Pressuring Turkey to clarify the current picture of extremist groups operating in areas of Syria under Turkish influence would also allow for the SDF to direct further attention back towards the resurgence of ISIS.

SDF-controlled camps and prisons containing thousands of ISIS fighters and their families—such as al-Hol camp, which contains the largest number of ISIS families—are a primary target for the organization’s cells. In particular, the camp holds hundreds of the so-called Cubs of the Caliphate programs, in which children from a variety of nationalities are indoctrinated in extremist ISIS ideology, as the organization sees them as a great hope for the re-organization of ISIS at regional and global levels. Therefore, preventing these radicalization efforts is key to preventing ISIS’s resurgence.

Likewise, it is easier for ISIS to gain a foothold in communities devastated by Syria’s decade-long conflict. It is therefore necessary to focus on rebuilding the areas liberated from ISIS and directing international efforts towards rebuilding the local economy, which will help prevent the local population from turning to extremism.

Governance is also vital; the international community can also make a difference by providing material support for local governments in the areas of northern and eastern Syria. This is particularly important in areas where governments struggle to regulate security and safeguard prisons and camps containing ISIS members and families.

It is noteworthy that in the past, extremist groups have capitalized on periods after their declared defeat to re-group and expand. The international community can obstruct ISIS efforts to do so by strengthening local governments, supporting SDF military capacities, and utilizing strategic communication with Turkey. Given the geostrategic benefits ISIS enjoys, and the distractions facing other key actors in the region, these steps are crucial to limit the scope of the group’s efforts to re-establish control.