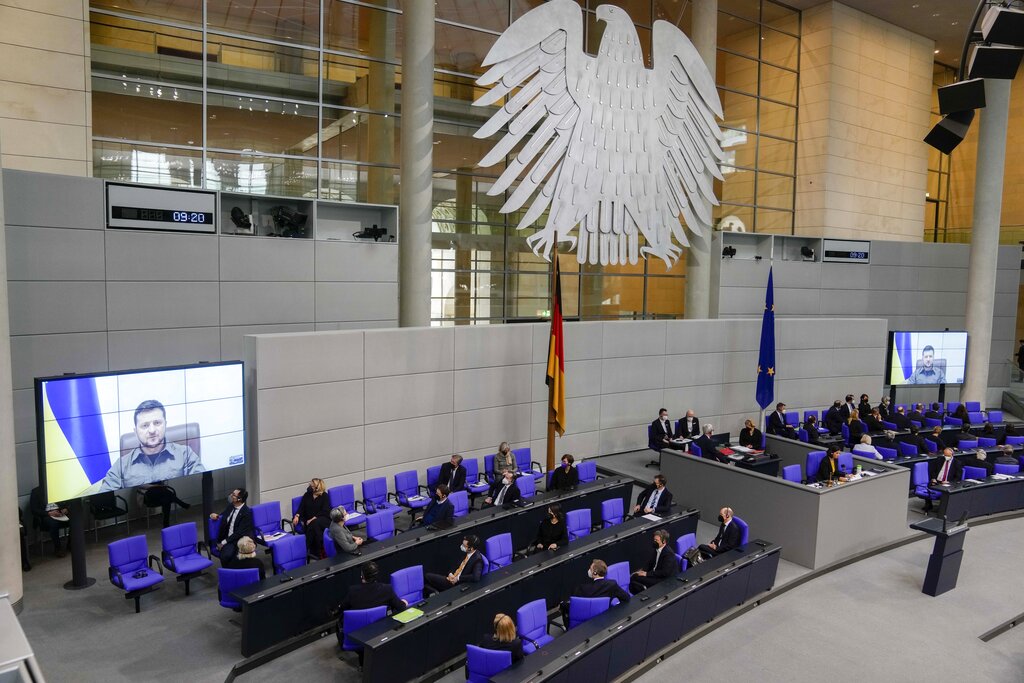 DW – Berlin’s former closeness to the regime in Moscow has damaged the reputation of German foreign policy. Can Chancellor Olaf Scholz’s policy shift succeed, given this fraught history?

Andrey Kurkov is a bestselling author based in Kyiv. He has always had a keen antenna when it comes to Eastern European views of Germany. There have been “a whole lot of anti-German emotions” that came up in conversations he had over the past three months, the president of the writers’ association PEN in Ukraine told DW. He is one of the most prominent commentators on Ukrainian affairs, writing for publications including The Economist and The New Yorker.

“Angela Merkel is being identified completely openly as a culprit,” he says. The former German chancellor of the center-right Christian Democrats (CDU) began doing “even more business with Vladimir Putin” even after the Russian president illegally annexed Ukraine’sCrimea Peninsula in 2014. And “after the start of the war in Donbass,” Merkel kept pushing construction of the Nordstream 2 pipeline through the Baltic Sea, says Kurkov, who painstakingly recorded the events of Ukraine’s pro-European Maidan revolution in 2014 in his book “Ukraine Diaries.”

‘We have the right to demand more’

Soon after the outbreak of war in February, Germany’s new chancellor unveiled a fundamental realignment in German foreign policy. A “Zeitenwende,” or paradigm shift, was what Olaf Scholz called it in aspeech to parliament, the Bundestag. Germany would invest massively in its military, he said. Germany would undo its economic interdependence with the aggressor Russia. The Kremlin would be boycotted.And yet for weeks, criticism from Ukraine has been raining down on German policymakers, first and foremost because Berlin continues to import huge amounts of raw materials from Russia, in doing so pays money to the Kremlin.

“We have the right to be emotional. We have the right to demand more — more weapons, more sanctions (…) You only lose money while we lose our lives!” Ukraine’s Vice-Premier Irina Vereshchuk said in early May, following the evacuation of more than 100 civilians from the besieged steel works in the eastern city of Mariupol.As is becoming more and more clear, Germany’s foreign policy volte-face is a painful process, taking place in step with Ukraine’s agony and the unfolding of the war.

A departure from Germany’s basic assumptions

That pain has much to do with the criticism of German policy since 2014, since Ukraine’s pro-European Maidan revolution and Russia’s assault on the country’s internationally-guaranteed sovereignty.”Something has changed since 2014 in German policy, namely the move towards a much more critical stance toward Russia compared to 2014, despite Nord Stream 2,” says Eastern Europe analyst Margarete Klein of the Berlin-based German Institute for International and Security Affairs (SWP), which advises the German government.

“However, no fundamental paradigm change in Germany’s Russia policy has taken place. It remains based on a series of unsustainable basic assumptions, for instance that one can keep economic cooperation and security policy conflicts separate,” Klein says, adding to this the belief “that a European security architecture can be established only by incorporating Russia.”In Klein’s words, the core of the Zeitenwende “means revising these assumptions, that we truly grasp that economic cooperation can also have ramifications for security.”

Practically all Eastern European states, including Ukraine, warned repeatedly in the past that Germany was exposing itself to extortion through its dependence on Russian energy. Yet such warnings from Ukraine simply went unnoticed, says Karl Schlögel, a German historian of Eastern Europe. He directs his criticism at himself as well. “The entire European focus — including mine and that of many in my generation — is Russo-centric. Who went to Ukraine, ever? Or to any other ‘provinces’ of the Soviet empire?” Schlögel told DW.

“That of course has to do with Ukraine having always been seen as a part, a province, a back yard, so to speak, of the Soviet Union and, before that, of the Russian Empire. It was never perceived as a subject in its own right, as a nation, a people.”This would at least partly explain the vehemence of the criticism from Ukraine of Germany’s foreign policy. Who would accept the assumption that they are not even supposed to exist?

And accusation weighs especially heavily on Germany, which invaded its Eastern European neighbors in the Second World War and systematically exterminated six million European Jews. “Until very recently, the main theater of German crimes in the east, namely Belarus and Ukraine, was not even on the map,” said Schlögel. That is despite the fact, he argues, that the crimes of Germany’s army, the Wehrmacht, have been laid bare to the German public since 1995. That was when the traveling exhibition “War of Annihilation: Crimes of the Wehrmacht 1941-1944,” also known as the “Wehrmacht Exhibition” by the Hamburg Institute for Social Research began raising awareness of German atrocities in Ukraine.

“It’s actually outrageous that it’s taken a new war to bring Ukraine as a battleground back into our memory, our awareness, onto our horizon. That’s alarming enough,” Schlögel tells DW.He adds that one can now “only hope” that, unlike after the successful Euromaidan revolution and the start of Russia’s war in Eastern Ukraine in 2014, Ukraine’s needs will not vanish from the European agenda. Russia’s war “did not begin in February,” Schlögel says. Since 2014, he points out, the war has claimed thousands of victims and caused mass flight and expulsions.

For Kurkov, there is indeed an escape from this cycle of German-Ukrainian harm. The memory of Germany’s reign of terror in Ukraine is currently receding, he says. “Much less is being said about the Second World War” in his conversations in Ukraine, he says. When people “refer to fascists, they now mean Russia and not Nazi Germany,” Kurkov says.Ukrainians closely watch Germany and its foreign policy chiefly because it’s regarded as the “top state of the European Union,” Kurkov says. Ukraine wants to become an EU member. The elites in Kyiv see clearly that membership in NATO could take much longer, he says. “Europe is a great hope and a key issue for the country’s independence,” Kurkov adds. “Europe means security for Ukraine.”